The Geneva Option by Adam Lebor 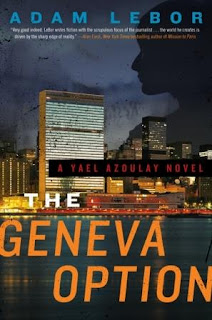 Yael Azoulay is a fixer for the UN Secretary General. She is not the kind of fixer whose primary tool is a gun. She relies on her wits, her intuition, and her ability to negotiate with anyone, whether warlords, genocidal dictators, and unscrupulous businessmen. When she is sent to the eastern Congo to negotiate with a Hutu warlord, something goes wrong, and she realizes that she's in serious danger, a danger with roots that snake there way back to the United Nations Headquarters.

Lebor writes action as well as just about any author I have read, and he sets scene quickly and vividly, sometimes with little more than a sentence or a phrase. One such sentence read, "Yael was drenched in seconds as the wet gusts hit her." This came in the middle of a fist-and-foot-fight between Yael and her captor in a car, shortly after the passenger-side windows shattered. At its core, the sentence is pretty basic, but it provides readers with a vivid setting for this scene in a mere eleven words. Brevity is hard to do.

Lebor includes a near perfect amount of detail in his writing, enough to immerse readers in a city, in a culture, or in an ornate 19th century building, but still well short of the overly-detailed writing of authors like Tom Clancy.

Although the preponderance of characters in The Geneva Option are fictitious, Lebor lends some verisimilitude to his international thriller, by referencing real-life events, situations, and in some instances even political figures. This, no doubt, stems from Lebor's investigative journalism background.

Although I really enjoyed The Geneva Option, I have one slight caveat. While I liked Lebor's Yael Azoulay character, there were a number of instances where it was obvious that this strong female lead was the creation of a male mind.
Posted by Carlton Farmer at 9:10 PM

I agree that brevity is hard to do. It's something I struggle with all the time, and admire when it's done well. I'm glad you enjoyed the book overall, and am thrilled to have had you on this tour!

Your review makes me want to check this one out; I enjoy thrillers if they're well written, but it's always so hard to judge one by its cover, so to speak.

Can you elaborate on the ways it was clear that the strong female lead was a creation of a male mind?

It came through in how Yael was described, the general sexual undertones of her character, a few sexual overtones... :-) Nothing crazy.
Definitely worth reading if you like thrillers.