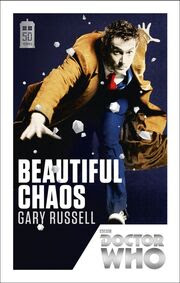 November 23, 2013 marks the 50th Anniversary of the BBC’s flagship sci-fi series, Doctor Who. Largely unknown to American audiences before its 2005 revival, it’s a weird show that follows the titular Doctor, a Timelord who travels through time and space in a big blue police box, picking up companions along the way for company. Having existed in one way or another for half a century, with eleven different actors playing the Doctor,  it’s not the most consistent property but it’s rarely less than enjoyable, and sometimes much more.
As a promotional push for the big 5-0, the BBC is reissuing a tie-in novel for each doctor. I’m going to be reviewing two of them, and we’re also doing a giveaway, about which, more info is forthcoming. But for now, onto the book itself.

Beautiful Chaos features the tenth doctor, as portrayed by David Tennant, and his final companion, Donna Noble. The storyline follows the Doctor as he attempts to prevent a malevolent alien intelligence from taking over the world with purple lightning and wifi. As expected from the tech-heavy premise, there’s a lot of technical mumbo-jumbo, including this, my favorite:


“I sent out a cancellation signal, via the net, to the M-TEKs everywhere. As soon as they are synced with computers, instead of downloading your orders, they’ll install a virus which will defrag the platform and erase their memories completely.” Dara Morgan tapped the return key one last time. “And, I’ve password protected it.”

Here’s a tech-support pro-tip: if defragging your computer erases its memory(sic?), you’re doing it wrong.

There’s a secondary plot, clearly close to author Gary Russell’s heart, about a secondary character, Nettie, and her gradually worsening Alzheimer’s. The plotline is handled tastefully until the end, when SPOILER the Doctor thwarts the intelligence by tricking it into inhabiting Nettie’s deteriorating brain--a weird, pretty cold-blooded tactic, although the world WAS in the balance, so let he who is without sin cast the first stone.

I never really know how to review these kinds of books. Aside from the Alzheimer’s subplot, there wasn’t a lot of subtext. It was basically an action movie in book form and didn’t take too much longer to read than watching a pair of episodes. It did a respectable job of matching the voices of the characters and it was nice to see some of these people again, since they’re no longer on the show. I guess if you’re familiar with Doctor Who, you pretty much know if you want to read this book or not. I enjoyed it for what it was--a very quick, somewhat silly read, that neither approaches the highs of the show’s best episodes or embarrasses the property. It does what it says on the tin.
Posted by Brent Waggoner at 11:56 PM

I was looking for audiobooks for an upcoming roadtrip and was very surprised to find a bunch of these. One is narrated by Matt Smith, which I find super charming of course.

Unfortunately, my road trip buddy is not a Whovian (yet) so I'm saving them for when I can completely geek out without having to be like YOU HAVE NO IDEA HOW AWESOME IT IS TO HEAR ABOUT DONNA NOBLE HAVE SOME COMPASSION! Because I really love my hate->love relationship with Donna and miss her.

Haha. Donna is my favorite (new) companion because they did away with all the romance and just had some adventures. We're actually doing a book giveaway later this month, so you might want to put your name in the hat.

I think these would probably be great roadtrip audiobooks, incidentally. They're basically the souffle of literature.