Not Less Than Everything, edited by Catherine Wolff 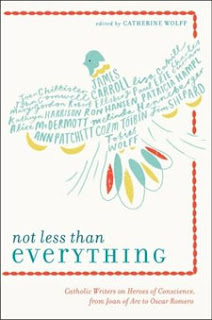 The concept of discipleship is helpful here: obedience to external commands is never enough. Our behavior, our motivation, our identity should reflect the teachings and the example of the one we are following.

Heresy is a tricky thing. Do it right, and you end up Martin Luther, lionized for throwing off the shackles of a legalistic and ungodly institution. Do it wrong, and you end up ostracized, forgotten or, worse, mocked by history, a cautionary tale.

The original blurb for Not Less Than Everything was something along the lines of, “Catholic writers write about their favorite heretics,” and, of course, how could I pass that up? Having read the book, I don’t think the description does it justice, but it was helpful in keeping me in the right mindset--namely that striking out, passively or actively, against the Catholic Church was a big deal. As a Protestant, I can just find a new church. A devout Catholic may believe, like the Whiskey Priest in The Power and the Glory, that excommunicated from the church he's damned. It adds weight to the decisions faced by the various “saints” in the book, not all of which have been--or, in the case of a few, ever will be--beatified. What they have in common, however, is their willingness to put their fate in God’s hands, trusting that following Christ’s example takes precedence over strict adherence to every papal edict.

As in most essay collections, the quality of the writing in Not Less Than Everything varies a fair amount. Some of the essays, such as the one on Max Scheler, are a bit esoteric; others, such as the scintillatingly titled, “A Pastoral, Person-Oriented Theology Worthy of Vatican II”, are just dry. Most, however, take an interesting approach to their subjects without lapsing into hagiography or strict biography. The best essays, in fact, tend to be the ones that treat their subjects as a jumping-off point, like Tom Beaudoin’s essay on Ignatius of Loyola, which he uses to make a larger point about the unstable relationship between critically thinking about one’s religion and blindly accepting it, and Ann Patchett’s The Worthless Servant, which tells a simple but powerful story of a priest who goes out to the highways and byways, giving cold glasses of water in Jesus’ name.

My favorite essay in the collection is the most different. “I Pray I May Be Ready With My Witness” tells of the conversion and struggles of troubled poet John Berryman. Berryman is one of my favorites, and reading about his childhood, his conversion, and his eventual suicide was heartbreaking. It is written by Paul Mariani, who I’d never heard of, and I’d like to close the review with an excerpt:

Protesters were being tried, imprisoned and fined, while others--college students--were being gunned down for refusing to participate any longer in the madness of Vietnam. The homeless were still homeless and the hungry went on being hungry. And, yes, his own body was failing and, yes, he had made mistakes and, yes, he was a human wreck, but he would bear witness in a terrible time as best he could. He hoped and prayed the heretic Origen was right after all and that Hell was “empty / Or will be at apocatastasis,” that is, at the end of time. Human failure--sin--seemed inevitable, given who and what we were. And, yes, no doubt we would suffer for it “now & later / but not forever, dear friends & brothers!”

I like to think of John Berryman as the patron saint of purgatory, shoulders hunched, still climbing on all fours the steep inclines of those mountains toward that distant summit shimmering in light, relieved to know he can sin no more.

Good review.
The title “A Pastoral, Person-Oriented Theology Worthy of Vatican II” sounds like a satire on academic paper titles.

Off-topic from the main point, but if Mariani in that excert is referring to the Kent State shooting (and I don't know what else he could mean), he is giving a horrible misrepresentation of it, as well as implying it was the norm, instead of a rather bizarre anomaly. The students were not shot for refusing to support the Vietnam War.

Back on topic, the book sounds fascinating, and applicable across all streams of Christianity.

The book is very good though. It's way less Catholic-oriented than the title and blurb would indicate.

Given a modicum of poetic license, his assessment of the Kent State shooting--I assume that's what he's referring to--is pretty fair.

Thanks for sharing your thoughts on this book for the tour.