Frozen in Time by Mitchell Zuckoff 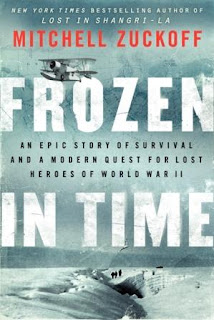 I don't read works of military history that often, and when I do, it usually is one that focuses more on individuals rather than strategy and troop movements. Frozen in Time is my type of popular military history. The book is split into two narratives, or as Zuckoff tells it, "two true stories, one from the past and one from the present." The story from the past is actually comprised of three closely-connected stories of military planes that crash-landed on Greenland during World War II. The other story is that of the present-day effort to find and salvage these lost planes, and to return the remains of the servicemen to their families in the United States. That may have seemed like a spoiler, but it really wasn't. Zuckoff makes it clear pretty early on in the book that some of the servicemen don't make it off Greenland alive.

In November of 1942, a C-53 military cargo plane crashed on Greenland's expansive ice cap, all five men on board the plane survived the crash. A few days later, a B-17 bomber searching for the downed C-53 and its crew crash on the ice cap, as well. The last plane to crash on the ice cap was an amphibious plane called the Grumman Duck. It was also part of the search effort. The Duck belonged to the Coast Guard Cutter Northland. From one chapter to the next, Zuckoff jumps between the stories of these three military planes, giving the reader insight into what caused the planes to crash, introducing the crew members aboard each plane, and detailing the survival efforts after each of the crashes. Zuckoff takes some liberties here and there, but they fall well inside the realm of possibility. For example, after the co-pilot of the B-17 bomber fell into a crevasse, landing about 100 feet below on a large chunk of ice wedge into the crevasse, Zuckoff writes, "Harry Spencer thought he was a goner." Of course, Zuckoff has no way of knowing what Spencer was thinking back in 1942--there is no mention made of a journal or diary. However, it is eminently likely that Spencer thought he was going to die when the crevasse swallowed him up. Zuckoff takes these small liberties throughout the book. While I was usually quick to recognize them, I took little issue with most.

The present-day--2012--portion of the story involves Zuckoff directly. As he was researching about these downed planes, he came across a man who would not only change the direction of this book but also his life. (I'm taking some liberties there... it's kind of fun.) This man was Lou Sapienza, the owner of the exploration company North South Polar Inc. and runs the non-profit organization Fallen American Veterans Foundation. When Zuckoff and Sapienza meet, Sapienza is trying to raise funds to travel to Greenland, locate the Grumman Duck (and possibly the other downed planes), and return these planes and the remains of their crew members to the United States. Zuckoff accompanies Sapienza to meetings with members of various branches of the United States military, and he eventually becomes
part of the exploration team. The way Zuckoff describes it, it sounds as though he bought his way onto the team. It was mutually beneficial: Zuckoff needed material for his book and Sapienza desperately needed money for his venture.

The book's chapters are relatively short, which means that the focus changes every few pages from one downed crew to the next or to the modern-day hunt for the Grumman Duck, which Zuckoff winkingly refers to as the Duck Hunt. Zuckoff does an excellent job of writing about the crew members of these planes. He developed biographies of each man--their physical traits, their personalities, and the lives they left behind back home in the States. Zuckoff found a riveting true story of survival and adventure, and told it very well.
Posted by Carlton Farmer at 2:19 PM

Good review. I really laughed at this:

However, it is eminently likely that Spencer thought he was going to die when the crevasse swallowed him up.

It's funny because it's true!

I can't wait to read this one - I love survival stories set in the coldest places on earth!