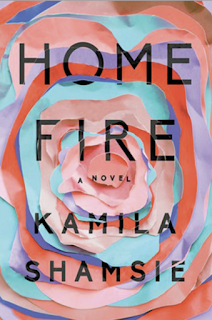 For girls, becoming women was inevitability. For boys, becoming men was ambition.

I'm coming out of retirement to review Home Fire, months after reading it, because it is still haunting me. The novel revolves around the lives of a British Muslim family, the Pashas. The father is gone before the novel begins, dead on his way to Guantanamo after being recruited by Muslim fundamentalists. He leaves behind three soon orphaned children: Isma, the eldest sister, and Parvaiz and Aneeka, twins. The novel begins with an adult Isma leaving London for the states to pursue her doctorate, and unravels as Parvaiz is recruited by ISIS and then attempts to return home.

The novel shifts between the voices of the Pasha siblings and their loved ones and paints a vivid and compelling picture of the complex allegiances that come with being a muslim in the Western world today (and, as the novel progresses, the impossible complexity of allegiances that come with a radicalized loved one). She grapples with gender and tradition, with ties to family and society, ties to host countries, home countries, and family countries. Each one of her characters is pulled in so many different directions at once, and she is able to illuminate those forces beautifully.

Shamsie pulls you in immediately and creates an uncomfortably compelling narrative, especially around Parvaiz as he slides into radical Islam. She does so, somehow, without endorsing terrorism or ISIS, but while humanizing the men who fall victim to its messaging. Her descriptions of grief and loss are what stuck with me, long after finishing the novel:


Grief manifested itself in ways that felt like anything but grief; grief obliterated all feelings but grief; grief made a twin wear the same shirt for days on end to preserve the morning on which the dead were still living; grief made a twin peel stars off the ceiling and lie in bed with glowing points adhered to fingertips; grief was bad-tempered, grief was kind; grief saw nothing but itself, grief saw every speck of pain in the world; grief spread its wings large like an eagle, grief huddled small like a porcupine; grief needed company, grief craved solitude; grief wanted to remember, wanted to forget; grief raged, grief whimpered; grief made time compress and contract; grief tasted like hunger, felt like numbness, sounded like silence; grief tasted like bile, felt like blades, sounded like all the noise of the world.


It took me until the final pages to realize that Shamsie was working from a allegorical prototype, and I'm sure a more careful (and less tired) reader would have caught it sooner, and seen the end coming. I'm torn as to whether to share it here because it lends a whole new dimension to the novel, but I also enjoyed coming to it myself.

This made me realize that, despite my efforts to diversify my shelves, I don't read a lot of Muslim narratives. Radicalism aside, the nuance of Shamsie's analysis of what it means to be a British Muslim has really stuck with me, and her ability to tackle fundamentalism on top of that is even more impressive. Highly recommend!
Posted by Chloe at 8:24 PM