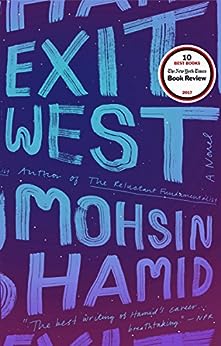 In the later afternoon, Saeed went to the top of the hill, and Nadia went to the top of the hill, and there they gazed out over the island, and out to sea, and he stood beside where she stood, and she stood beside where he stood, and the wind tugged and pushed at their hair, and they looked around at each other, but they did not see each other, for she went up before him, and he went up after her, and they were each at the crest of the hill only briefly, and at different times.

This is the most beautiful book I've read since Marilynne Robinson's Gilead.  Hamid's writing is poetic, but deliberate and matter of fact.  Exit West tells the story of Nadia and Saeed, who fall in love in an unnamed Middle Eastern city as it descends into civil war.  Saeed and Nadia escape the violence through one of the mysterious doors that begin to appear all over the world and throw global order into chaos.  No one knows where the doors will appear or where they go, but when one steps through, they can find themselves in Mykonos one minute and the bedroom of a vacant mansion in London the next.  As a result, the refugee crises we know now are amplified by virtually unrestricted migration.  Nadia and Saeed's world becomes more and more dangerous and uncertain, but their story is told on a personal level, which both detaches the reader from the global disorder and heightens the drama, for when it is seen through the eyes of individuals who aren't omniscient, it seems more realistic.

Exit West doesn't try to take on too much and is better for it.  Despite the violence all around, there isn't a lot of action and nearly no dialogue.  Still, Hamid's descriptions paint vivid pictures of his characters and the changes that they must confront.  In addition, through his characters he is able to consider what it means to be a migrant and what it means to be a native, and how those descriptions can shift over time.  This is really a spectacular book; one of the best I've read in a long time.