Zinsky the Obscure by Ilan Mochari 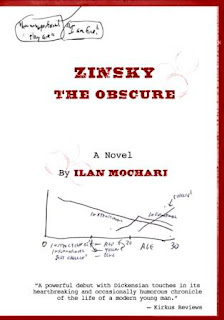 When he is thirty years old, Ariel Zinsky come to the conclusion that no one cares about his life story, so he decides to write it. He takes some paper from work and beings with his childhood. This is the premise of Zinsky the Obscure, Ilan Mochari's debut novel.

The quote about suspension of disbelief is a good indication of the tone of this novel. Zinsky is essentially the telling of the life of a young misanthropic man living in New York. It bares some resemblance to Confederacy of Dunces, but the story and writing lacks the absurdity that was so integral in making Toole's novel so enjoyable for me. Mochari's Arial Zinsky has all the angst of Ignatius J. Reilly but little of the bravado and ridiculousness that made him such a memorable character.

The unfolding of the story of Zinsky's adolescense is coupled with thirty-year-old Zinsky, from whose perspective the book is written, reconnecting with members of his family. Zinsky the Obscure is an angsty and emotionally raw novel, with nuggets of brilliant writing and storytelling buried in its pages. It's a strong debut novel for Ilan Mochari.

Posted by Carlton Farmer at 6:19 PM

Carlton, thank you for reviewing my book!

Sounds like you enjoyed it overall. Thanks for being on the tour!