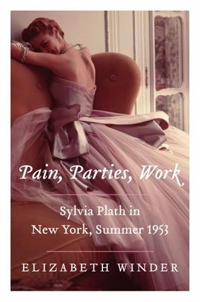 When Pain, Parties, Work, a new micro-biography of Sylvia Plath, came up for review, I decided I should introduce myself to some Plath, who I had never read. I owned The Bell Jar and some poetry, and decided to start with the novel. Having read Pain, Parties, Work, I’m really glad I did--although I knew that Plath’s experiences as a junior editor for Mademoiselle had informed her most famous work, I didn’t realize to what extent. A Venn diagram of Plath’s trip and the plot of The Bell Jar would almost be a circle.

For those unfamiliar, Plath was an amazing poet and writer whose suicide has come to define her, unfairly, as the patron saint of depressed teenage girls. Elizabeth Winder, a poet herself, wrote the book as a way to rewrite Plath’s story in popular culture, and, while I’m not sure the book will be enough to change public perception, Winder does a good job turning Plath into a fully-formed human being.

The layout of the book is interesting--it looks something like a magazine itself, with sidebars and images interspersed throughout the text, and the actual chapters vary in structure as well, from oral histories from Sylvia’s roommates on the trip to poetic excursions into the ephemera of Mademoiselle, the fashion world, and other, related topics. This makes for a fast read, but the information is good, and as a transformative tool for Plath, it works wonders.

Plath wasn’t the type to lock herself in a room to write. Instead, she gathered her inspiration from her experiences, particularly, as Winder notes, the concrete details of her experiences. Winder makes the case for Plath as an aesthete, appreciative of beauty for its own sake, one who believed the art needed no purpose but to exist. Not only was Plath a concrete thinker, she was also a social creature. She had a policy of never turning down a date, saying that even the worst of them provided material for her writing. Indeed, several of the dates mentioned here provide fodder for their lightly-fictionalized counterparts in The Bell Jar.

Plath’s fellow junior editors didn’t know what to make of her, and I don’t either, exactly, after reading Pain, Parties, Work. What I can say is that, between The Bell Jar and this book, my perspective on Plath has been challenged and upended. It’s challenged my sometime unintentionally sexist views on literature, and made me more open to trying other female authors who I might have previously dismissed. And I’m sure future readings of The Bell Jar will be greatly enhanced, knowing something about the story behind the story.
Posted by Brent Waggoner at 3:48 PM

This sounds cool. I need to read The Bell Jar.

Thanks for reviewing! I love that my book might be a prompt to re-examine some other women's books and art-- that's the best thing I could hear!

Elizabeth, thanks for your comment! It's always wonderful to hear from the author on these reviews.

I have to admit that my own knowledge of Plath and her work is sadly lacking. Maybe this book it a good place to start learning more!

I think i only one person who hated this book.

I am really excited to read this book. The Sylvia Plath poster in my room keeps diving down off my wall which allows me to exercise my excellent taste in making suicide jokes (too soon?)

Although I made her a poster, I don't think I really loved her until one of my AP students did a brilliant presentation on her. She picked Sylvia Plath's death date for her presentation, dressed up as her, and delivered an excellent analysis of one of her bee poems which has given me a soft spot for her and for bees.

That sounds like a great presentation. Plath is a great writer--massively underrated, probably for the sexist reason that she really, really appeals to teenage girls. Her writing is top-notch.

This article is mind satisfactory. I read very carefully.

"Elizabeth Winder, a poet herself, wrote the book as a way to rewrite Plath’s story in popular culture, and, while I’m not sure the book will be enough to change public perception, Winder does a good job turning Plath into a fully-formed human being."
I think it's interesting that we've formulated this stereotypical depressed angst ridden woman...given her another category since she doesn't fit into any of the existing ones :/ Like you, I appreciated the look at Plath as an entire person, not just her writing. I think there's a lot here for new generations to learn about the sacrifices of the not so nerdy woman all locked up in her room. I enjoyed your review! :)

Thanks, Peppermint! It's always nice to receive some affirmation from a member of the medical establishment.

This article is mind blowing. When I read this article, I enjoyed.