Capital of the World by Charlene Mires 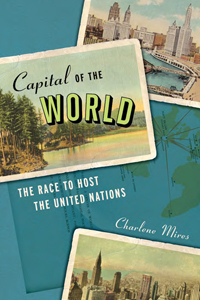 When discussing government infrastructure, as I often do, the question sometimes arises, “Why is this organization located here, and not here?” I have always assumed that most buildings are placed by playing a riveting game of “Pin the Building on the Map” and then having a few drinks. I kid, but in truth, this is not a topic most people, myself included give a lot of thought to. Charlene Mires’ Capital of the World, which follows the United Nations from conception to finding its own place, reveals the truth behind the process: it’s not a game of darts, it’s more like a finely tuned farce, where dozens of setpieces move ridiculously before dovetailing, in the end, to a denouement that seems inevitable. One of the people in the book says it should be a movie; I’d like to nominate the Marx Brothers to star.

I don’t want to give the wrong impression: Mires’ book is not a work of humor. It’s a scholarly work whose bulk is nearly 25% endnotes and other appendices, and, though Mires is a good writer, she isn’t aiming for comedy. It’s just that, as the story plays out, it’s hard not to laugh. There’s a large cast of characters and the story is writ large on the world stage. Apparently, everyone wanted the U.N. in their backyard (except Concord, CT) and residents, from average Joes to the Rockefellers, fought to get it there. The size of the “capital” also went through various metamorphoses during the process: originally conceived as a small town, the U.N. eventually became a large compound instead.

There’s far too much content in Mires’ book to go into much detail about the process, but Mires keeps the book moving at a pretty steady pace, even if I did get a little bogged down once or twice in the endless litany of names and places presented for consideration. Of course, even that isn’t necessarily a bad thing--it probably accurately replicated how the U.N. felt after being approached dozens of times by boosters from South Dakota, Michigan, San Francisco, and, of course, New York. The material, which could potentially be very dry, is handled well, and I suspect that someone more attuned to world history or any of the civic areas the book touches on would enjoy it even more than I did. There are also numerous photos and sketches throughout, and they serve as a powerful illustration of how crazily monomanicial the various boosters got in pursuit of their cause.

In the end, the U.N. ends up in New York City, of course, and, to us 75 years later, the competition for the U.N. looks a little silly. Mires is aware of this, but she addresses it well at the end of the book when she says:


Looking back, if it all seems a little crazy, then we have lost touch with the atmosphere of determination, hope, and anxiety the characterized American society at the end of the Second World War. We have forgotten the time when people in cities and towns across the United States imagined themselves on the world stage--and not just the stage, but at its center as the stars of the show.

If you want to see if your hometown was a contender, check out the full list at Mires' blog, Capital of the World.
Posted by Brent Waggoner at 10:37 PM

Brent, thank you for reading my book. If anyone would like to see if their hometown jumped into the competition to become the Capital of the World, I have posted an expanded list on my blog, http://www.capital-of-the-world.com.

Professor Mires, thanks so much for your comment. It doesn't look like my tiny hometown of Frankfort, Indiana was ever a contender, but that's not too surprising. I'm going to add your link to my post. Thanks again!