And Now We Shall Do Manly Things by Craig J. Heimbuch 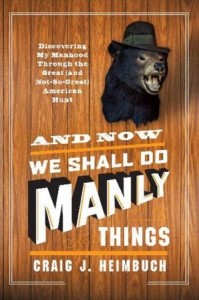 Craig Heimbuch could almost be me. We were both born in the Midwest, to families and cultures that were more outdoorsy than us. We both have an unnatural, borderline prejudicial fear of rednecks. We‘ve both fought insecurities about financial stability, fatherhood, our relative manliess. The difference between us is essentially this: To combat his insecurities, Heimbuch took up hunting. I decided to read 50 books a year, which isn’t as memoir-ready.

And Now We Shall Do Manly Things is essentially summarized above, the through-line being Heimbuch’s journey from freelance writer to freelance writer with a gun. As with most “I did this” memoirs, the tone is light, but there’s a real pathos to the early sections, where Heimbuch reflects on his own history, from marriage through childbirth, and a poignancy to his description of his parents and extended family—outdoorsmen all— people he clearly loves but feels disconnected from in some essential way. Everyone has felt it, the sense of otherness, and Heimbuch, at his best, captures the feeling wonderfully. At his worst, he attempts to inject humor that just doesn’t work—most of the fictional conversations played out like vaudeville routines with no punchlines—but for the most part, I laughed where I was supposed to, and the book read amazingly fast.

The big question I had, coming into the book, was this: would it change my mind about hunting? I’ve always thought hunting for sport was kind of stupid at best, and kind of barbaric at worst—though I’m sympathetic to the idea that, if left unhunted, deer would overrun the world like so many graceful vermin—and I was genuinely hoping to have my perspective enlarged. To an extent, it was: Heimbuch’s discussion with various hunters made sense, especially the oft-repeated bromide that “if you’re willing to eat meat, you should be willing to kill it”, and, by the end of the book, I was rooting for him to finally get his elusive pheasant. On the other hand, the descriptions of field-dressing turned my stomach and I’m not planning to start hunting myself anytime soon, so, I don’t know... maybe I should be vegan?

I’m glad I read And Now We Shall Do Manly Things. It’s likely not a book I would have sought out myself (I received a free review copy), and it’s helped me understand a mentality I’ve been around but have never really understood. If I were feeling hyperbolic, I might even say it’s caused me to reconsider my own life and what it means, to me, to be a man. Maybe I’ll write a book about it.
Posted by Brent Waggoner at 11:47 PM

Email ThisBlogThis!Share to TwitterShare to FacebookShare to Pinterest
Labels: and now we shall do manly things, craig heinbuch, hunting, memoir, nonfiction, outdoors

I don't mind hunting but it is certainly not something I'd like to do myself (no field-dressing for me please!). Still, I think it makes for a fun memoir!

I'm glad you enjoyed this one. Thanks for being on the tour. I'm featuring your review on TLC's Facebook page today.

Awesome! I'll have to Like you guys. Thanks a lot for all your support--I really enjoy getting free books. ;)