Strangers in Their Own Land by Arlie Russell Hochschild 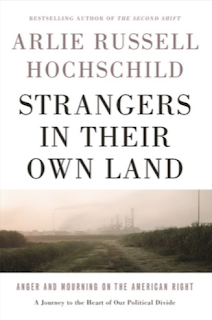 An empathy wall is an obstacle to deep understanding of another person, one that can make us feel indifferent or even hostile to those who hold different beliefs or whose childhood is rooted in different circumstances.

Strangers in Their Own Land takes a sociological lens to Hilary's "basket of deplorables" and attempts to scale the empathy wall that divides Us (coastal, urban liberals) from Them (the entire middle of the country). Hochschild spends five years visiting a community in Southern Louisiana and getting to know its residents--most of them ravaged by industrial waste and entrenched in systematic poverty. Her goal is to figure out why these Americans fall into what she calls the Great Paradox: those who need the benefits of "good government" (welfare of all kinds, environmental protections, education, and healthcare) the most are those most likely to reject it. After some initial research, she decides to hone in on a "keyhole issue," and base her conversations around the environmental impact of industry in the South. She focuses on individual peoples' experiences and tries to tease out their "deep stories:" the emotional roots of their political preferences.

This was a hard book to read, but one that I really needed. Hochschild started her research in 2010, long before a Trump presidency was any kind of a reality, and published earlier this year before it was a guarantee. The path from Tea Party supporter to Trump supporter is not extensively discussed, but it can be inferred from the observations Hochschild makes. There are pieces missing (among others, she grazes over the ways in which misogyny has become the norm), but this book goes a long way towards explaining how kind, generous, thoughtful people hold political views that make them seem (to liberal elites at least) ignorant and racist. I wasn't fully brought over the empathy wall, and there were times where I wanted to climb into the book and scream at the subjects, but it added a much-needed layer of humanity to my understanding of the lives of Tea Party supporters.

Hochschild's choice to focus on Southern Louisiana made for horrifying descriptions of the environmental devastation brought on by the oil industry. Beyond the obvious tragedy of oil spills destroying coastlines along with fishing and shrimping industry, we are told of entire bayous eliminated by toxic sludge; cyprus trees felled after hundreds of years by poisonous runoff; an entire community collapsed into a giant sinkhole because of careless drilling. The list goes on and on, and in each case people's lives are very concretely affected--they lose their jobs, their homes are ruined, they get cancer, their horses fall into pits of noxious goo that solidifies into rubber and kills the horse in days (an actual thing that actually happened). All of this clearly and explicitly because Louisiana refuses to regulate the oil industry, and more and more companies are moving in to process and store chemicals, produce plastic, and extract oil and gas from the bedrock. And yet, with one or two exceptions, everyone Hochschild talks to is opposed to environmental regulation. It's never said explicitly, but the general idea seems to be that environmental regulation exists now, and has done nothing to help. With environmental disasters as with social issues, the sense is that people should be caring for their own communities--that money and effort should be spent within the confines of their own spheres of influence because they know better than people in the state house or in DC what their communities need.

That seems to be a piece of the root of the "deep story" that Hochschild uncovers: there is a belief that if people work hard enough and are given control over the fruits of their labor, that they can fix all the problems both in their own lives and in their communities. On top of that, they feel that while they're working hard and trying to get ahead, the government is not only holding them back, but pushing others ahead of them. She uses the metaphor of a long, slow moving line with the American Dream at it's end, over the crest of a hill:


In that story, strangers step ahead of you in line, making you anxious, resentful, and afraid. A president allies with the line cutters, making you feel distrustful, betrayed. A person ahead of you in line insults you as an ignorant redneck, making you feel humiliated and mad. Economically, culturally, demographically, politically, you are suddenly a stranger in your own land. The whole context of Louisiana--its companies, its government, its churches and media--reinforces that deep story. So this--the deep story--was in place before the match was struck.

The match, in this case, is the Trump candidacy, and Hochschild goes on to explain the ways in which many of her subjects got on board (some reluctantly, others less so).

Hochschild does a good job of acknowledging her own biases, which was especially helpful for me since they are very similar to mine. I think if she had just presented this as a case study without comment, I would have had a lot more trouble processing her findings. She points out the ways in the underlying logic is flawed while still gently encouraging herself (and you) to practice empathy. She has entire appendix in the back where she debunks some of her subjects' statements like "The more environmental regulations you have, the fewer jobs" or "Black women have more children than white women." This section was very cathartic (it was all the yelling I had wanted to do while reading!), but it also left me frustrated. I wanted so badly for the people in the book to see the logic that was so obvious to me, but that wasn't the point of the book. The point, which is well taken, is that we make our decisions (both political and personal) based on our perception of reality: a perception that is shaped not just by facts and research but also by personal experience, family history, faith, and cultural context. By pulling back the curtain on some of the less empirical but just as crucial elements of our decision making, Hochschild makes clear how angry and displaced these people are feeling, and why that anger has led them to the far right.

This was a challenging emotional read, but an important one. If you find yourself reeling after the election and struggling to understand how we possibly got here, this is a great place to start. It won't necessarily convince you that people are making the right decisions, but it will help illuminate why they've made the choices they have, which is an important first step to seeing them as human beings and not as the basket of deplorables it has been so easy to characterize them as.