The Big Book of Irony by Jon Winokur

Utah will never, ever be ironic.

Jon Winokur's The Big Book of Irony is about eight inches by five inches, and 150 pages long. I probably should have anticipated that when I put it on my Amazon wishlist, but maybe I'm not a very accomplished ironist.

I wanted to read this book because I wanted to start planning a unit on irony (and satire, parody, and comedy) for my AP English class focusing on The Importance of Being Earnest and Pride and Prejudice. The Big Book of Irony fails to make this task any simpler--Winokur obstinately refuses to support one definition of irony over another, preferring to embrace its essential undefinability.

On the other hand, for a slim book, it provides a wealth of examples that I can use, since Winokur's method is essentially to collect as many quotations and examples of irony as possible. This approach lends itself to sloppiness--for example, Winokur basically repeats identical observations on the finale of Seinfeld in separate sections, once as his own and once as a quotation from Slate's Michael Hirschorn. Elsewhere he repeats Kenneth Wilson's bizarrely mistaken claim that the separation-prone Quebecois may be offended by the name of the Vancouver Canucks (which can be considered disparaging) while their own hockey team sports the "all-Canadian name of Maple Leafs." (The Maple Leafs represent Toronto, which is in Ontario.)

But it also seems overwhelmingly comprehensive. The best parts are a section of short biographies of those Winokur considers master ironists (perhaps the only list ever compiled comprising both Jane Austen and Sarah Silverman) and a section of real-life examples of situational irony:

During the filming of an episode of TV's Homicide: Life on the Street, a fleeing shoplifter blundered onto the set, saw the show's actors with their guns drawn, dropped the loot, and surrendered to them, thinking they were actual policemen.

Winokur also includes compilations of quotations entitled "Against Irony" and "In Defense of Irony" without comment, though it's pretty clear where Winokur comes down when he makes observations like, "Brutal dictators are irony-defiicient--take Hitler, Kim Jong-il, and Saddam Hussein, a world-class vulgarian whose art collection consisted of kitsch paintings displayed unironically." On that note, I'll leave you with this actual "art" piece from Hussein's collection: 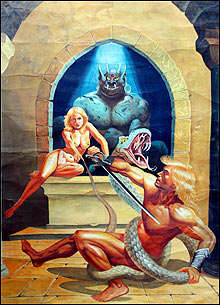 Posted by Christopher at 1:30 PM 0 comments

Elizabeth I by Anne Somerset Under Elizabeth, the nation regained its self-confidence and sense of direction. At a time when the authority of the majority of her fellow monarchs was under threat or in decline, she upheld the interests of the Crown while not encroaching on those of her subjects, restored the coinage, and created a Church which, for all its failings, came close to being truly national. While many European countries were being rent by civil war, insurrection and appalling acts of bloodshed, she presided over a realm which (with the exception of her Irish dominions) was fundamentally stable and united. She herself was proud of the contrast between the condition of her own kingdom and that of others.

It might not be fair to compare Anne Somerset's stout biography of Queen Elizabeth I with Stacy Schiff's recent book about Cleopatra--Somerset has probably roughly a hundred times the primary source material to work with--but it is difficult to resist the temptation. Elizabeth and Cleopatra are, after all, probably the two most powerful and legendary female rulers in history. (With Catherine the Great a distant third... am I missing someone?) And while I liked Schiff's colorful account, Somerset's chronicle of Elizabeth's life seems to me to strike the perfect balance between engrossing and rigorous. Like Schiff, Somerset often leans too far in Elizabeth's favor. But as the passage above notes, Elizabeth offers much to be praised, if not lionized. She was prudent, and ably protected her nation from the financial ruin that decades of war threatened; she was shrewd, and ultimately outwitted and outlasted the host of Catholic powers--Spain, France, Rome--that demonized her and her rule; she was a great communicator, and her speech at Tilbury deserves its renown:

I know I have the body but of a weak and feeble woman; but I have the heart and stomach of a king, and of a king of England too, and think foul scorn that Parma or Spain, or any prince of Europe, should dare to invade the borders of my realm; to which rather than any dishonour shall grow by me, I myself will take up arms...

Somerset is smart to let her own prose get out of the way of Elizabeth's, whose words have the power of great poetry. Being a monarch is surely a largely thankless position, but who has expressed as wonderfully as this: "Who longest draws the thread of life, and views the strange accidents that time makes, does not find out a rarer gift than thankfulness is, that is most precious and seldomest found."

But Somerset is also honest about Elizabeth's faults, which are myriad. Her shrewdness meant that she was not particularly loyal, and she felt free to break what few promises she made. She was unerringly temperamental, and though reluctant to imitate her sister "Bloody" Mary Tudor, she sent her fair share of her subjects to the Tower of London for perceived slights. Much of her authority was predicated on a delicate system of romantic gamesmanship, in which her courtiers professed a Petrarchan sort of romantic love for her. (See Raleigh's "The Ocean to Cynthia," where the Ocean is Raleigh, whose first name was pronounced as water, and Elizabeth is Cynthia, a name for the virgin goddess Diana.) These relationships, Somerset explains, cemented her courtiers' loyalty and intimacy and prospered the Queen's reputation, but they also placed the courtiers in a sort of limbo that prevented them from marrying. When they did marry, it was often in secret, and if the Queen found out, as she did in the case of her favorite, the Earl of Leicester, it meant political disgrace or, in extreme cases, a trip to the Tower.

In much the same way Elizabeth responded to the pleas of Parliament to produce an heir by maintaining a long succession of would-be husbands, none of which (to the Queen's clear delight) ever came to fruition. Such was the double-edged sword of Elizabeth's womanhood; it afforded her a kind of power over foreign governments eager to form alliances, but her unwillingness to formalize a marriage made the nation's future uneasy.

My favorite episode in Elizabeth's life, and one about which I knew very little before reading this book, is the long captivity of Mary, Queen of Scots. Mary was the Catholic queen of Scotland, but also Elizabeth's cousin and probable heir, which meant that she was the inspiration of innumerable rebellions and attempted rebellions who wished to depose Elizabeth and place Mary on the English throne. Unsurprisingly, this led to an uneasy relationship between the two. Ultimately, when Mary was implicated in the scandalous murder of her husband Lord Darnley (because she, uh, married his murderer), she was forced to abdicate in favor of her son James and flee to England where Elizabeth had her arrested. For almost two decades Elizabeth held Mary prisoner, ignoring her advisers' pleas to execute her, until serious plots against Elizabeth's life forced her hand. Somerset describes Elizabeth's pains of conscience as the fruit of her stalwart belief in divine right:

She did not regret that Mary had been killed, but deplored the official nature of the deed, for even though it had been unavoidable to do violence to an anointed Queen, it would have been preferable if it had been done unwitnessed and on the sly. Much as Elizabeth had detested her cousin, she was speaking no more than the truth when she told the French ambassador in May 1587 that "this death will wring her heart as long as she lives."

The best part of the story, however, is the fact that one of the conspirators was so sure that Elizabeth's murder would be lauded by the English that he commissioned a portrait of himself and the other conspirators beforehand, making it really easy to identify the other culprits.

Somerset's biography is not made to be a best-seller; it is too thick, too dense, and too respectful of its readers' intelligence for that. (She, for example, leaves odd Latin phrases untranslated.) But it shares with Schiff's Cleopatra a clear, breezy style with a muted undercurrent of sardonicism. It's nearly three times the length of Cleopatra but I found myself being bored with the latter far more quickly. Part of that may be Somerset, but part of it may be Elizabeth, who is legendary while Cleopatra seems only a legend.

Posted by Christopher at 7:26 PM 1 comments