Alison Bechdel's memoir Fun Home must be one of the most lauded graphic novels of all time, and with good reason: it's incredibly complex and incredibly moving.  I resisted the urge to add "for a graphic novel" to the end of that last sentence, because I think that it stands on its own as a piece of great literature, rather than relative to the quality of graphic novels in general.  In fact, Fun Home seems vital in a way that very few novels from the last ten years really can claim.

Bechdel's memoir describes her experience coming out as a lesbian, while at the same time learning that her father had been having affairs with men for decades.  He dies, hit by a car, shortly after these revelations.  Bechdel wonders in Fun Home if he stepped in front of the car intentionally, but there's no way to be sure, and she must grapple with the pain of that uncertainty.  Either way, his death is the catalyst for the novel, which seeks to do the work of reconciliation and understanding that her father's absence made impossible to do face-to-face.

One thing that surprised me about Fun Home was how literary it was.  Bechdel's father was an English teacher (in addition to running the funeral home which gives the novel its title), and Bechdel turns to numerous literary sources in search of a narrative that will make her relationship with her father meaningful.  Camus, Fitzgerald, Proust, Joyce, and Wilde all make appearances.  But these narratives never seem to quite be enough to help Bechdel pin her father down in a way that provides consolation or closure.  The choice to write the memoir as a graphic novel seems significant in this way, as an attempt to break with the insufficient narratives of the past and make something new--without abandoning or dismissing the authors of the past. 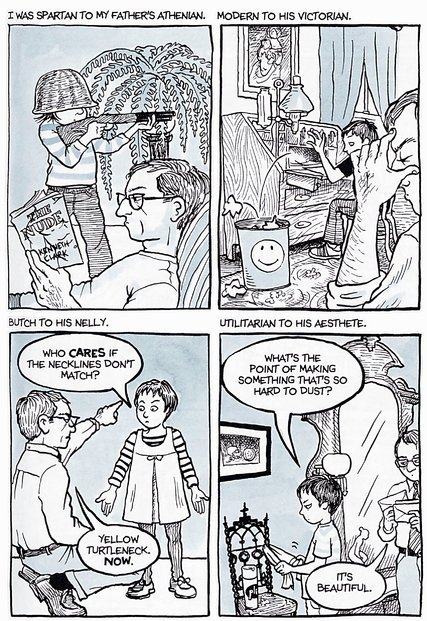 That's a really academic way of looking at it, I guess.  But essentially, Fun Home is a very human, very moving story.  Bechdel's relationship with her parents is very troubled--she describes her father as cold and aloof for most of her life--and as soon as it looks like they might have something to bring them together, he dies.  As beautiful a story as it is, there's a fundamental and ineradicable sadness about the impossibility of recovering that lost opportunity.
Posted by Christopher at 3:25 PM

As far as biographical novels go, this is one of the best I've read. Love the art too, and the literary allusions are some of the least intrusive I can think of. The structure could easily have come off as contrived but it's really a work of art.