The Hound of the Baskervilles by Arthur Conan Doyle 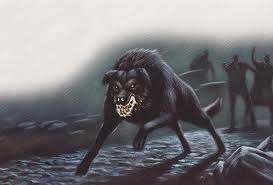 A spectral hound which leaves material footmarks and fills the air with its howling is surely not to be thought of...if I have one quality upon earth it is common sense and nothing will persuade me to believe in such a thing.  To do so would be to descend to the level of these poor peasants, who are not content with a mere fiend dog but must needs describe him with hell-fire shooting from his mouth and eyes.

This is a fun novel.  First, Sherlock treats Watson like a little kid; this amuses me to no end.  Second, unraveling the hound's mystery makes this an easy page turner.

But, what I love about the novel is the distinction Watson draws above: the distinction between reason and superstition.  Watson, as an educated, enlightened man is above buying into the foolish superstitions.  In a reversal of the more orthodox faith crisis, Watson is regularly confronted with a need to question the efficacy of reason.  As the novel progresses, the reader (and Watson) are given more and more evidence that the Hellish hound exists.

This evidence is all but confirmed when Sherlock and Watson see the hound itself, glowing and fiery in the night.  Of course, reason carries the day, and Sherlock's brilliant mind explains to everyone else how the hound came to be.  A rational, scientific explanation, free of any supernatural non-sense.

Lawyer sidenote:  I also enjoyed this novel because we see the utopian ideal promised by reason properly applied: no crime is unsolvable, if the right mind applies itself.  This utopian ideal is represented in every single crime drama currently on television.  The reality of criminal investigations bemoans this ideal.  I mention this because one of my (anticipated) themes for this year is crime.  Yup.

Good to see you back, Randy!

I love Holmes, and Hound is my favorite of the novel-length stories. Good analysis of the faith-reason aspects of the novel. I find it even more interesting that reason always prevails in Holmes because Doyle himself was quite a spiritualist.

Not even gonna lie, I'm excited to be doing this again.

Just read the wikipedia on Doyle...I love that he was buddies with Houdini until they couldn't agree on whether Houdini had supernatural powers.

I'm excited that you're doing it again too--your review of Portrait of the Artist as a Young Man might hold the record for most comments on this blog.