From Hell by Alan Moore (Author) and Eddie Campbell (Illustrator) 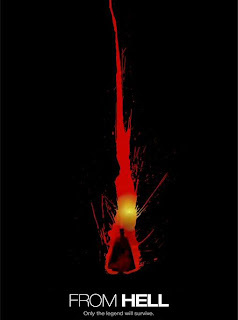 "With all your shimmering numbers and your lights, think not to be inured to history. Its black root succours you. It is INSIDE you. Are you asleep to it, that cannot feel its breath upon your neck, nor see what soaks its cuffs? See me! Wake up and look upon me! I am come amongst you. I am with you always!"

Since reading Watchmen, I've made a point to read more graphic novels. For me a good graphic novel is one that could just have easily been just a novel. In other words, the story and characters need to be rich and interesting. From Hell fits this bill perfectly.

From Hell is a work of historical fiction, dealing with Jack the Ripper. Works of historical fiction often simply use history as a backdrop for a story, weaving historical figures and events into the narrative to give it life. From Hell is not one of these works. While Alan Moore would never claim that From Hell is anything but fiction, he points out in his extensive and interesting annotations at the end of the book, that the fictive elements are essentially theories--based on bits of evidence. Moore theorizes that Dr. William Gull was responsible for the Whitechapel murders that took place in 1888. This theory is not the creation of Moore, but has been propagated by a number of Ripperologists and authors. Moore has filled in gaps in the evidence with plausible fiction.

The artwork by Eddie Campbell is arresting, both in it's detail and it's level of macabre. Moore and Campbell pull no punches in their depictions and descriptions of the Whitechapel murders.

I spend almost as much time reading the 42-page Appendix I as I did the rest of the book. Flipping back to the corresponding pages, I was again and again amazed at the level of detail that went into this book. As much as possible, Campbell based his artwork on photographs and maps from that time. The list of books that Moore drew from in his telling of the the Jack the Ripper murders was impressive, rivaling that of many popular historians. He routinely used phrases and quotes from the police records of the murders and newspapers stories of that time.

From Hell is a dense 500+ page book. Given its length and its subject, I could see how some people wouldn't be interested in reading it. I found it engrossing.
Posted by Carlton Farmer at 5:42 PM

You know, after reading this, I would like to watch the movie again. I think is deviates drastically from the novel.