Reality and Dreams by Muriel Spark 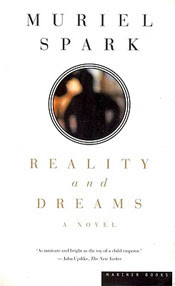 She had married him for his looks which were admittedly star quality; but marriage was not a film; Cora was not a director; she had cast him in the role of a husband and he was hopeless at it. In screenplays the husband has a script to go by. Johnny had next to none.

The only other Spark book I’ve read, The Prime of Miss Jean Brodie, did not in any way prepare me for this slim volume. Strangely, it reminded me much more of late-era Don DeLillo: it is similarly dispassionate, features a lot of stylized dialog, and even the plotline reminded me a lot of DeLillo’s Point Omega. It is, however, much colder and crueler than that; no one does distant like Muriel Spark.

The story follows Tom Richards, a film auteur whose entire live revolves around his film career. Not only does he spend most of his time either on the film set or working on his scripts, he sees the world as a giant set itself. He wonders, more than once, if the world is just a dream God is having, and it isn’t hard to see why the question fascinates him—in his mind, the world is a dream in his head. The story begins after Tom has a fall from a crane while shooting a difficult shot, which brings his family together. The family consists of Claire, his sort-of, open-relationship wife, Cora, his child from an earlier marriage, about whom Tom nurses some disturbingly romantic feelings, and Marigold, Tom and Claire’s daughter, who no one else in the family really understands or likes.

Redundancy is a recurring theme in the book, both the American and British sense. American, in the sense that all the characters feel redundant to one another—Tom’s stream of young actresses are ultimately made redundant by Claire; Marigold is born redundant, since Cora already exists—and British in the sense that everyone seems to be losing their jobs, to such an extent that Marigold decides to make a documentary about redundancy. At some point in the novel, Marigold disappears, and, since this seems to be one of the few Spark books that has a mystery at its center, I won’t spoil what eventually happens. I will say that this is where the book most closely reminded me of Point Omega—in both novels, a strange girl disappears and no one seems especially miffed. Here, though, the reasons no one really cares are spelled out, and boy, are they cold. It’s hard not to see some parallels with Spark’s own life—as covered here—and her estrangement from her own child.

Everything ultimately explodes in violence, according to the blurb on the back, although “explode” is probably a bit strong. Instead, things fall into a not-so-nice cyclical arc. Things get a little muddled thematically, but Reality and Dreams is a funny, nasty, thoughtful piece of work.