Some Legal History for the Lawyer Folk

To Keep and Bear Arms: The Origins of an Anglo-American Right by Joyce Lee Malcolm

In this book Joyce Malcolm analyzes the British history of the right to bear arms. She focuses on the transformation in England from a duty to bear arms into a right to bear arms. Specifically, historically men in England were expected to possess a firearm so that they may join roving militias. If, for instance, a crime was committed, there was not really a person or organization in place to seek out and arrest the criminal. In such a situation the men were called forth and expected to serve their communities by helping to find the criminal, if necessary, by force. However, gradually expectations changed as parliament 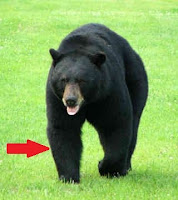 struggled against the monarchy to consolidate its own authority. As parliament and monarchs bumped heads against each other, the perception that the other had control of weapons was seen as a threat and two things happened. One was an extreme skepticism towards the efficacy of a standing army. The second was the development of a right to bear arms; this second development was seen as a way of curbing the threat of a standing army (it was thought that an armed populace could stand against an evil standing army).

Be warned, this was a terrifically boring read. Of all the books reviewed here, this is the one most meant for an academic audience (and thus least approachable for someone with a general interest in legal history). For all that, it's also the book which most changed my perspective. Before reading this book, I agreed more with Stevens' dissent in Heller, but now I'm more in line with Scalia's view.

(Pictured: A right bear arm, indicated by the arrow; not to be confused with the right to bear arms.)

Brown v. Board of Education: Caste, Culture, and the Constitution by Robert Cottrol (my history 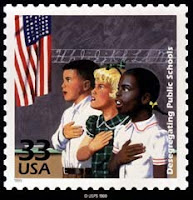 Here, the authors placed the social/political/legal history of Brown within a context of caste. That is, they understand black history and the equal protection clause to be a protracted debate about whether the United States is or should be a caste system. Thus, slavery is understood to be the epitome of the American caste system, and on the other side of the spectrum, Brown is understood to be the rejection of the caste system. The starting and ending points, however, are the least interesting points of this book's analysis (the parallels between slavery and caste are somewhat obvious). What is most interesting about this book is the understanding of caste which the authors use to explain Southern antagonism to Reconstruction, and the broader understanding of the Reconstruction Amendments which Brown represents.

(Pictured: Barack Obama as a child (left), in a desegregated postage stamp.)

The Death Penalty: An American History by Stuart Banner

I have the least to say about this book. Like Brown (the book, not the case), this book gives the reader a social/political/legal history, focusing on (yes, you guessed it), the death penalty. Banner's history is devoid of any ethical or moral lessons about the death penalty, his intent is merely to lay out the cultural role of the death penalty in the U.S. Of interest is the changing nature of that role. In the 19th century, executions served as a kind of community entertainment and parable. Members across the socio-economic spectrum would attend an execution which came to be a spiritual ritual. Audience members would be made aware of the crime, often written versions of the crime would be sold at the execution. The accused would be given an opportunity to speak; in an ideal execution he would explain the errors of his ways and pray for the Lord's forgiveness. In this way the community would have an opportunity to show an example of improper conduct and its inevitable result. 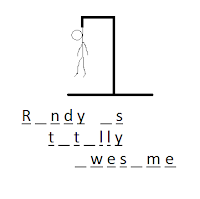 As time passed however, it became vogue to feel repulsion at what was soon viewed as a mob's pleasure. Executions, an imprecise science, came under attack for their ineffectiveness (stories of failed hangings became more and more prevalent; apparently there are few things worse than watching a person suffocate to death while hanging). A science of executions developed (this is how we got such marvels as the electric chair, the gas chamber, and lethal injection), which was not necessarily more precise. Thus executions went behind closed doors and only certain political elites could gain access to them.

Interesting thing: Apparently the age-old debate about executions is literally age old; it hasn't changed in the 200 years of this country: deterrence and retribution have been the talking points the entire time. Yeah, bit of an interesting thing.

(Pictured: Another victim of hanging, condemned for inadequate spelling skills) 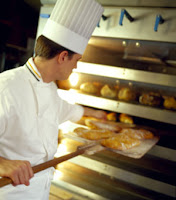 All law students who take Constitutional Law II read Lochner v. New York which is universally reviled as the worst Supreme Court decision, ever. (Yes, even worse than Dred Scott, which legally speaking isn't as absurd as high school history teachers make it out to be). It's considered the apex of judicial over-reaching, legislation from the bench. How dare the Supreme Court have the audacity to question a legislative judgment?!

This book focuses only a little on the legal history of the case and focuses much more on the political aspect, looking at New York politics and how the law regulating bakers' hours came to be passed. What's interesting about this book is that it doesn't focus on Lochner (the case) as a case of judicial over-stepping, instead it treats the case as a case about bakers and politics. A fun read for the story behind the story of Lochner.

(Pictured: A baker, or a victim of laissez-faire capitalism?)

Reconstructing the Fourth Amendment: A History of Search and Seizure, 1789-1868 by Andrew E. Taslitz

I hated this book. As such it is highly ironic that I spent the most time with it relative to these other legal histories (I wrote a paper on this one). The book purports to be a history of t

he Fourth Amendment (my favorite Amendment to read about) starting with the Founding Fathers and going through Reconstruction. Histories of the Fourth Amendment during the founding era are not remarkable (relative to other Amendments, the Fourth's history is well documented), but an ante-bellum history is hard to come by. After reading the book, I became convinced that such a history is hard to come by because the Fourth Amendment didn't really mean anything until the advent of the exclusionary rule (the rule by which illegally obtained evidence is inadmissible in court). Unfortunately, Taslitz focuses on all the different ways that slaves did not have privacy, freedom of movement, or property. The problem with his focus is that the Fourth Amendment did not really protect these things per se until the criminal procedure revolution of the Warren court. As such, the book ends up being a history of slaves with brief references to the Fourth Amendment. I think this is another book which takes a conventional history and tries to give it a novel treatment (in this case a racial treatment) even though the novel treatment does not give us any novel conclusions as to history. I would not recommend this book to anyone.

The Intruders: Unreasonable Searches and Seizures from King John to John Ashcroft by Samuel Dash

This is another history of the Fourth Amendment. It's one of those awkward books that just doesn't have a market. In one way it's too academic: it's too abstract for most lay people to want to read (it goes into the drafting history of the Amendment and often analyzes the nuances of S

upreme Court opinions). In another way it's not academic enough: the history of the Fourth Amendment and analysis is so dumbed down that no academic could confidently cite this work as an authority.

As such, though the book isn't bad, I probably wouldn't recommend it to anyone because I don't know who I would recommend it to. The thesis of the book is that the Founding Fathers intended, in the Fourth Amendment, to give us broad protections from searches and seizures; unfortunately the evil conservative rights-hating establishment (ie republicans) have systematically narrowed and chipped away at these rights, turning the Fourth Amendment from a gallant princess-saving white knight into a whiny little bitch with an inferiority complex (I might be paraphrasing a little). Dash particularly takes issue with the treatment of terrorists and the freedoms which have been afforded the Bush administration (yes, the work is a little dated) in seeking out terrorists.

(Pictured: The only thing worse than an liberal-yuppie-terrorist-loving ACLU lawyer is a criminal defense lawyer.)

This was really an epic post. Kind of made me want to read Lochner v. New York though. Is that something my library might have?

PS, I figured out the hangman, but who is Rondy?

i know who rondy is, but i didn't know he was titally awesome.

and did you not read a single good book about the fourth?

Yes, Lochner v. New York: Economic Regulation on Trial should be available in any university library. I'm not sure about a local library. Be warned, you won't want to eat in a bakery from the 19th century ever again.

Rondy is my cousin. He's a terrible speller.

No, despite my best efforts I could not find a single good history (book) about the Fourth Amendment. I found a reasonably good (but technical/boring) article; written by a Davies or something. If you're interested I could give you the west law cite. The only other thing I found was the "authoritative" work on the history of the Fourth, which was some behemoth 1000 page massively comprehensive history which I did not even want to think about (for fear my head would explode).

I would recommend reading the Death Penalty book, less because it will help you for your class (I have no idea if it will) and more because it's an interesting and (relative for an academic history) easy to read.

are you sure it was written by davies and not davies' donkey?