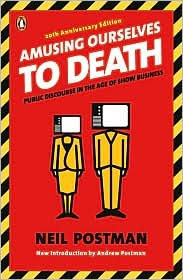 Many a time we've participated as a family in the "No TV for a week" program at my children's school. Every year my kids, for the first few days, act like they're going to die a slow, retracted, terribly excruciating death. What? Read a book instead of watching SpongeBob? Play outside with our actual legs moving, our actual heart beating, instead of our fingers getting early carpel tunnel on a game console? But my "friends" won't know that I'm eating dinner, or that I ran an errand today! Perish the thought!

Until eventually, when the whining reaches a decibel only dogs can hear, it then, amazingly, stops. They adjust. They realign like a good hip joint slipping back into place. A miracle happens. We start to do more together as a family. We talk more around the dinner table because we're not in a rush to get back to the idiots on Survivor. Do we all fall in love again? No, this isn't The Cosby Show (hee hee), but really, by the end of the week we do connect again in almost a primal way. (Just kiddin. I do love my family anyway, sort of..when they're nice to me..)

I agree with Postman, we are now more Brave New World than 1984, in that we love the distractions, the silly minutiae that controlls us. I like OK Magazine just as much as I like Newsweek. Reading a book online and on the printed page is as aligned in my brain as peanut butter and jelly. But as our little tv and computer experiment shows, it is possible to get back to the prehistoric basics if we want to.

But do we want to?
That's the problem.
Brave New World here we come. 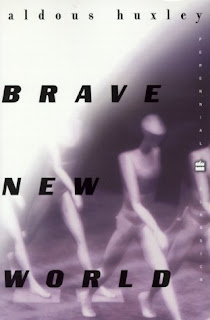 Written in the 1930's, I got the feeling throughout that Huxley wasn't a big fan of American capitalism, or was that just me. Hmm..
Have we turned out like he predicted? Are we sex-starved, atheist, gum-chewing, movie-watching, drug users who never want to be unhappy, at all costs? (Did I mention I like OK Magazine and Entertainment Tonight?)

Maybe not to that extreme, but we have evolved I guess. For better or worse, in this "marriage" of ideas who knows for sure. It probably depends on who you ask - which may also depend on who you voted for, and who you listen to on the radio. I tend to hope our country isn't headed straight down the crapper, but don't mind me - I'm high on my "soma" and am currently hanging out on Fantasy Island and getting a tan with Ricardo Montalban. Read the book and you'll get why I said that. Worth at least one try for its historical significance. 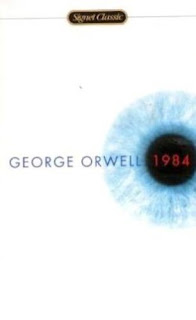 So, the year 1984 came and went without too many major government take overs. (Not really but let's pretend.) But we've made great strides haven't we? Currently, we can steal a person from their home claiming they've violated the rules of our country. They're an Enemy of the State not worthy of basic rights. A great danger to the norm we call our society. We torture them for answers they don't want to give. Tell them they're insane, that our way is the best way, the only way, until they break and the creases are permanent do we cure them of their vile ways. A shiny new American penny coming out clean on the other side. A carbon copy of ourselves and our ideals. Or so we think.

But what if instead of America, it's Oceania. In place of Guantanamo Bay, put the Ministry of Love. In the place of our government, put Big Brother.

Even I noticed the similarities.
And I'm a Democrat.
Scary, scary.
Anybody else have some thoughts on these books and the state of our current lives? What similarities do you see?

As for me, time to read something lighter, like Of Mice and Men before I run as fast as I can into a brick wall, or drive my imported car off a cliff.
Posted by L at 10:46 AM

Haha. I love that you're reading Of Mice and Men to lift your spirits.

Do I get a prize for squeaking his name in?

And yes, I'm about to slit my throat.

Keep on saying OK, if you wish your demise):