A Kiss Before Dying, by Ira Levin 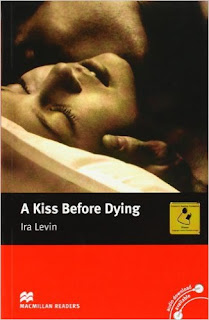 I was looking for something fast and fun to read when I stumbled across Ira Levin's A Kiss Before Dying. I knew him primarily from Rosemary's Baby (which, full disclosure I've never seen or read, but c'mon--Rosemary's Baby) and Stepford Wives, and was somehow unaware he'd done any crime writing.

A Kiss Before Dying has a really interesting structure that makes it work. There are several viewpoint characters, and a sequence of deaths that are about as unexpected as anything I've read. There's a lot of fun 70s atmosphere and some nice hard-boiled dialog, and the writing is very clean--it doesn't knock you out of your seat, but read some bad crime fiction and you see what a neat trick it is.

The plot, well, I don't really want to talk about it much, because even naming all the characters is probably a spoiler of sorts. It's murder mystery that takes place on a college campus, and involves three sisters and their rich dad, and a murderous schemer who wants to get his hands on the money. There's a mid-book twist that brings to mind Psycho, in a positive way, and the killer, whose identity isn't revealed until near the end of the book--a neat trick, since he pops up throughout--isn't exactly charming, but he's so pragmatic that it's hard to really hate him.

It also has a rather nasty little ending, and keeps moving clear through. So if this super-vague review makes it sound interesting, check it out. It's a quick read and a lot of fun, even if it does have a lot less Satan than his best known work.
Posted by Brent Waggoner at 12:32 AM