Powhatan now gestures at the girl-child who's saved him.  Sweet John peers at her for the .1.st time.  Shaveheaded in front, she sports long black tresses plaited near about as tightly as chains of beads.  Nobly confident (which perhaps beseems her blood), she gazes into his face.  He can't accompt her now.  His heart's not yet sure it's allowed to beat.  How could he discover her face, let alone remember it?

She is wearing winter skin-clothes with the hair on them.  At her throat she wears a stone bead with a round carven face which gazes upon him with deep-sunk eyes.  He fears it, & her.  (She herself hath glistering eyes.)  What if she proves tigress?

She smiles upon him.  Now he fears her not.

The story of Pocahontas is pretty nuts.  John Smith, early Virginian colonialist, claimed in his memoirs that she saved him at the last moment from being executed by her father, the Native American king Powhatan.  That might not be true--or it might have been an elaborate ritual designed to indicate Smith's rebirth as a Powhatan.  We know that story from the Disney film.  But Disney leaves a lot out: Pocahontas was no more than twelve when she saved John Smith, and later on life she's captured by English settlers, who marry her to one of their own as a way of forcing the Powhatans into peace.

In his novelization of the Pocahontas story, Argall, William T. Vollmann leaves nothing out.  And I mean nothing: every detail of Smith's life, no matter how irrelevant, is included here.  Vollmann takes no artistic license, except perhaps for the quasi-Elizabethan pidgin English he employs (which is reminiscent of novels like Nothing Like the Sun and The Wake).  Reviews seem to have objected to the overly digressive nature of Argall, which pushes 700 pages and seems to think every minor historical character needs thirty pages of background, and I understand that.  But I wonder if there isn't something noble, given the amount of artistic license taken with Pocahontas, and with Native American history in general, in the way Vollmann desires to lay the entire historical record out.

And besides, the story as it is, and as Vollmann tells is, is incredibly powerful.  He describes a Jamestown that is perpetually on the brink of starvation, ruled by petty men disappointed in their expectations of gold, and who rely on the surrounding Natives to provide them with enough food to survive.  The relationship between the English and the Powhatans is alternately friendly and inimical, vacillating between free, though uneasy, exchange and horrible, bloody raids on both sides.  (But mostly, tbh, by the settlers--Vollmann goes out of his way to show there's no equivalency.)  Many of these raids are run by Smith himself, who idolizes Machiavelli and puts Machiavellian precepts into practice in his brief ascendancy at Jamestown.  But the relationship between Smith and Pocahontas, still just a child, is the one relationship between Natives and whites built on genuine affection, and it offers the slightest hope for reconciliation, even love, between the two groups.

I read the section of Argall that details Pocahontas' captivity with the English right after seeing Room, and that amplified, for me, its tragic sadness.  Her conversion to Christianity and marriage to John Rolfe seems like Stockholm Syndrome, or perhaps just the brokenness of a woman stolen from her family and home.  "I am nothing," she tells her cousin.  Later, in England, she meets John Smith after more than a decade--the English told her he had died--and she can do more than turn her face away.  Vollmann takes that from the historical record, and it is deeply sad, as sad as the historical record itself.  Speaking later, Smith begs her to tell him her real name, the secret Powhatan name which she betrayed her father by confessing to the English, and she scorns him with the pet name she gave Smith as a child:

As she whispered to him that same word that she had uttered long ago:  Mufkauiwh, which signifies A Flower of a fine thing.  But this time she whispered it in bitterness.  And he never learned whether her father had called her this, or whether she meant it to apply to him as in the olden days.  After that she withdrew & would not come out.  When Maister Rolfe (having seen their guest to the door) peeped in to visit her, he found her weeping so wild as to be almost beyond the bounds of submission.


In the end, the story of Pocahontas and John Smith is deeply sad, and yet familiar: here are two people who loved each other, but whose love could not survive circumstance.  When, we wonder, might it not have been too late?  We might as well ask the same question about the native peoples of Virginia, whose wholesale subjugation and eradication was so complete as to be perhaps beyond all remedy.  Vollmann, who is in the midst of a planned seven-book series about the relationship between Europeans and Native Americans, wants to reveal to us how we all are inheritors of this great evil, which we abide in and cannot escape.  He closes the novel with a series of road signs in "Virginia"--that swath of land from New England to Florida--that, while gimmicky, underscores this very point: 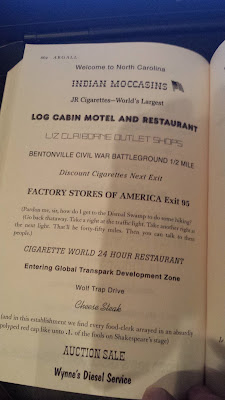 Even the title is telling--not Pocahontas or John Smith, who are losers (in the Trump sense), but Argall, the name of the scheming, amoral captain responsible for Pocahontas' capture.  Sometimes the novel hits this note too hard, and seems didactic or screed-like.  But mostly it succeeds in giving the tragedy of history a human face.
Posted by Christopher at 8:09 PM