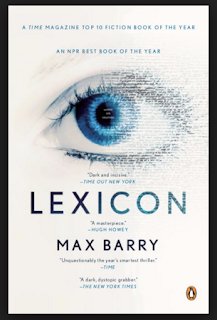 "We attempt to conceal ourselves, Emily, but the truth is we do not entirely want to be concealed. We want to be found. Every poet, sooner or later, discovers this: that within perfect walls there is nothing worth protecting. There is, in fact, nothing. And so we exchange privacy for intimacy. We gamble with it, hoping that by exposing ourselves, someone may find a way in. This is why the human animal will always be vulnerable: because it wants to be."

In Max Barry's Lexicon, "poets" are members of an underground organization that trains them to use language to manipulate others. Through (increasingly sinister) historical and psychological research, they've identified specific sounds that short circuit the brain and give poets complete control over others. Once you get over the mild Harry Potterness of the premise, it works.

The book is completely immersive. It's fast paced from the first page and follows two story lines at breakneck speeds until they eventually merge. Along with the action (which is plentiful), there is just the right amount of intrigue/mystery to keep you hooked. The pacing and suspense can make it feel a little bit like a YA novel at times, but there is just the right amount of nerdiness--decent amounts of Latin and Biblical references, a fake Reddit thread--to make you feel like a grown up while reading it.

The female protagonist (who also spends a significant amount of time as an antagonist) is a total badass, and you can't help but root for her even when she's destroying most of the people around her. She's convincingly vulnerable and angry and, once you buy into the premise, convincingly good at the whole brain short circuitry gig. Once she catches on, she also effectively mirrors the reader's outrage at the horrors of what she's doing.

In the book's reality, the organization manages to cover up each instance of brainwashing with odd cover stories that sound an awful lot like real life news stories. Throughout the book, Barry sprinkles faux articles, internet posts and comment threads, and emails about these cover stories where regular people start to question what is actually going on. This is where the book somewhat loses me. Barry veers into social criticism a little too blatantly and hits you over the head with what you're supposed to think. Like this gem on data gathering:


I'm not a privacy nut, and I don't care that much if these organizations want to know where I go and what I buy, But what bothers me is how HARD they're all working for that data, how much money they're spending, and how they never admit  that's what they want. It means that information msut really valuable for some reason, and I just wonder to who and why.

Overall, Lexicon is a fun, engaging read. It takes itself a little too seriously at times, but once you get past that piece, it's totally worth it.