Roundup (Me, desperately trying to catch up)

The Life-Partner of Frankenstein by Batton Lash 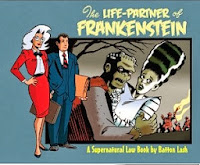 "From what I heard, the county clerk was rendered speechless . . . He had never before seen people like these before . . . A strange pair who only wanted the same benefits and recognition that the state gives to any 'normal . . . .'"

Batton Lash has written an entire comic series about Alanna Wolff and Jeff Byrd, counselors of the macabre.  They are attorneys who represent supernatural creatures (one might even say, creatures of the night).  In this adventure, Wolff and Byrd represent Frankenstein and Lady Frankenstein, who want to get married.  The townsfolk (complete with pitchforks and torches), believe that such a marriage would be an (gasp!) abomination.  This is an extremely subtle metaphor for gay marriage.  So subtle, in fact, that I almost missed it during my first reading.

Not really.  To be fair, Lash is not trying to be subtle.  The comic is full of the most obvious criticisms of arguments against gay marriage (including the scene where the heterosexual, married couple is depicted as being unhappily married).  By the end, Frankenstein and his bride, Freda are given the right to be married.  Everyone lives happily ever after.

All in all, a fun, quick read.

The Time-Traveler's Wife by Audrey Niffenegger

“Clare, I want to tell you, again, I love you. Our love has been the thread through the labyrinth, the net under the high-wire walker, the only real thing in this strange life of mine that I could ever trust. Tonight I feel that my love for you has more density in this world than I do, myself: as though it could linger on after me and surround you, keep you, hold you.”

I was expecting this book to be a tacky romance.  I was only partly right.  Niffenegger's playing with non-linear narrative works well: we get non-chronological puzzle pieces at different points in the novel and it is only in later parts of the book that we see where the pieces fit.  This adds a level of complexity to the novel that makes it a better novel.  My favorite aspect of this novel was the impending sense of doom that Niffenegger hints at early on.  We know for a long time that something bad is going to happen; we watch as the protagonists know too. 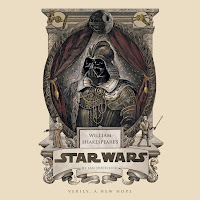 The desp'rate hour is now upon us--please,
I beg thee, Sir.  O help me, Obi-Wan
Kenobi, help.  Thou art mine only hope.

Every now and again someone has a simple but brilliant idea.  An idea that really should have occurred to someone long, long ago, but, alas, has not.  Ian Doescher has done a favor to humanity by having, and executing, a much needed idea.  So, now we have, Shakespeare's Star Wars.  Same story, now with more Shakespearean iambic pentameter.  We are a better society, now.

Substantively: the book is well executed.  The prose is faithful to Shakespeare; the plot is faithful to Star Wars.  Admittedly, the novelty of the idea wears a little thin by the end.  But, it's so much fun, I didn't care.  I desperately want to see a stage production.
Posted by Randy at 3:34 PM

Tacky romance? You wouldn't know romance if it hit you in the face as a DESPERATE PLEA TO BUY YOUR GIRLFRIEND FLOWERS! The tacky part you have covered - just look at your tie collection. The one with the LED lit Christmas tree is truly offensive to all aesthetics.

I take back what I said about romance. Tacky still holds. For the love of all things holy, did you really need a storm trooper tie with PLASTIC BITS OF STORM TROOPER UNIFORM ON IT? How is that appropriate office attire?? Do you work on the Death Star?