Greyhound to Vegas: The Odyssey of Hilda Reynolds Krause 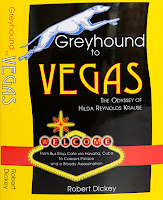 Among those who knew him best, without dissent Krause's pugnacious personality was acknowledged, always combat ready and much like a bantam rooster.  True to form, he briefly considered resistance, trying desperately to envision exactly how this old friend, Billy Conn, would handle this crisis when size and number were unfairly weighted against the slender Krause.  The smaller Conn, who had battered Joe Louis to a standstill in 1941 (good enough to win until Louis knocked him out in the 13th round), would surely know how to master the rogues.

Regrettably, Conn wasn't there as Krause stood alone, facing a handgun looking as big as one of those howitzers he had seen during army service at old Camp Campbell--mainly because it was steadily aimed at the center of his chest, his impeccably tailored silk suit offering no protection whatsoever from the threat imposed by the firearm.

I read this book as part of a general attempt to become more familiar with Vegas history.  Please ignore the shoddiness of this review; I am approximately 6 books behind and my goal is to catch up quickly.

The passage above reflects how all 200 pages of this book goes.  Unnecessary adverbs, non-sequitur clauses, and show-off but irrelevant facts litter the book's narrative.  I do not recommend reading this.

This biography follows Hilda Krause, who was brutally murdered in Las Vegas; from her humble beginnings running a restaurant in Kentucky to her more grandiose stature as an investor in Caesar's Palace.  She was ultimately the victim of a homicide.

I'll mention one other criticism of this book and leave it at that: the author took a rose-colored approach to everything in Hilda Krause's life.  Her husband was an obvious gambling addict, but Dickey tries very hard to convince the reader that, despite this gambling addiction, Hilda's husband wasn't really a gambling addict.  The result is that it is difficult to trust the book.
Posted by Randy at 1:31 AM

Are there any great Vegas novels?

I hear Fear and Loathing in Las Vegas is good, but I haven't read it. I just start a book by the former mayor, and also plan on getting to a book by one of Nevada's governors. Maybe one of those will be good...

The only one I can think of is Fear and Loathing. I did a quick google search and found a few lists that are filled mostly with books I've never heard of that are semi-historical accounts of different events and famous people. Vegas is SUCH a stereotype I think it's a little hard to write about without being cheesy.

I haven't read Fear and Loathing since high school, but at the time I really enjoyed it! I'd be curious to see what my older teacher non-drug-romanticizing self would think of it. My LDS bestie just read it and was surprisingly into it, so I think it's definitely worth a reread on my part.

Also someone should make a terrible stick figure cartoon with a film noir voice version narrating that writing. Ugh!