Don't Shoot: One Man, a Street Fellowship, and the End of Violence in Inner-City America by David Kennedy 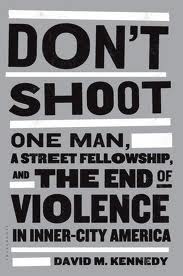 Because nobody likes what’s going on now.

We can’t see it because we’re all too locked in opposition.  The cops are writing off the hot neighborhoods, the hot neighborhoods think the cops are race predators, the street guys hate the cops and people who call the cops, the cops think the street guys are sociopaths, it all goes full circle.  Everybody thinks everybody else is doing this because they want to, nobody talks to each other, when we do it’s all anger and accusation, it never goes anywhere.  It’s hiding in plain sight, but we can’t see it.

Problem: gang violence spinning out of control, bystanders (read: innocent children) are getting shot in the cross fire.

Solution?  Here, a split in approaches:  on the one hand is the New York approach, controversial for its disparate impact on racial minorities and large number of citizens who get stopped and frisked (i.e.,pervasive violation of constitutional rights); on the other hand is the Boston approach, championed by Kennedy in this book.

Kennedy’s approach: 1) investigate and surveil the gangs to determine who the members are and build cases against them; 2) call them all together in a meeting with community organizers, prosecutors, and police officers; 3) tell them, “We know who you are, who is behind the violence, and we need it to stop.  Now.  The next gang involved in a shooting is getting shut down.  All these cases we’ve built, we’ll prosecute them against everyone in that gang;” 4) offer them connections to community resources.

Kennedy believes one of the causes of gang violence is the breakdown between law enforcement and the community they’re supposed to be protecting.  The community believes that officers don’t care about them, that officers are racist and are looking for any excuse to send young black men to prison.  If officers cared, the reasoning goes, why do they allow the neighborhood to be in such bad shape?  The officers, on the other side, believe that the communities want to suffer the pervasive violence of their neighborhoods.  If the community cared, why would they refuse to call officers with information about crimes?

Kennedy’s approach seeks to resolve this problem by getting the community involved and engaged with law enforcement.  The outreach allows officers to speak directly to gang members and convey that they do, in fact, care about them.  Officers don’t want to send people to prison unnecessarily.  On the other side, by putting gang members in front of the officers, officers see that the gang members are not sociopaths.

Of course some violent offenders are sociopaths.  But, Kennedy’s approach is not aimed at officers controlling individual behavior; rather, the approach is aimed at giving individuals within the gang an incentive to control each others’ behavior.  “Make sure your colleagues are under control, or we’re shutting your entire gang down.”  By creating a group incentive to prevent each other from engaging in violence, individual gang members no longer have the legitimacy that justified their actions before.

And, Kennedy’s approach works.  In the cities where the approach was taken, violent crime rates dropped (the book is essentially a summary of Kennedy’s work with cities and his academic work collecting data).  This without widespread violation of constitutional rights and without rifts between community and police officers.

Why do we care?  Because this is a cost-efficient and effective method of crime deterrence.  It’s deterrence without the destructive social costs of stop-and-frisks, arrests, or prison.

For those of us invested in the criminal justice system, this approach offers a chance to put us out of business.  We can say “no” to the prison industrial complex.  Put differently: it’s great to vindicate a defendant’s constitutional rights and prevent the state from over-reaching; it’s better if the defendant never got arrested because he didn’t commit a crime.  Or, for the prosecutors out there: it’s great to send a criminal to his deserved punishment; it’s better to have prevented the crime altogether.

Kennedy’s point is that we can prevent crime without destroying lives and communities.  Given that we can, why aren't we?
Posted by Randy at 7:49 PM

if we strengthen communities and decrease violent crime, then who are we going to feel self-righteous and judgmental toward?

does he touch on the prison industrial complex much? that seems like a horrifying development that i'd like to learn more about

Sounds interesting.
“Make sure your colleagues are under control, or we’re shutting your entire gang down." is a fun sentence.

Yes, the need to demonize Other communities is an admirable social goal.

I don't remember him talking about the prison industrial complex too much. In fact, I'm not sure he ever addresses it; it doesn't fall under the ambit of this book's goal, although it's closely related.

I've been keeping an eye out for books on the prison industrial complex for some years now, and so far have not seen anything that looked too interesting. Perhaps I'm not looking in the right places.