Thirty Days With My Father by Christal Presley 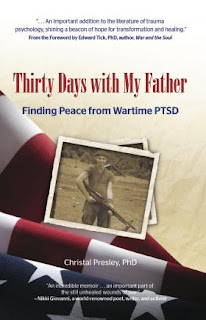 "[S]ometimes I felt sorry for my father, and sometimes I wished he would die. And all the while I loved him and wondered if the war really had made him like he was or if it was just him."

At a writing workshop, a speaker posed a question: "What if you wrote about the thing you fear the most?" This prompt resonated with Christal Presley, and she knew what she feared the most: her father and "the war he brought home with him from Vietnam." This question lead her to decided to talk with her dad either on the phone or in person (they didn't not live all that close to each other) every day for 30 days.

Presley had haunting childhood memories of her father, of him "snapping" and chasing her around the house because she had dropped some plates, or him locking himself in his room for hours, of him announcing that he was going down to the river to shoot himself and then walking out of the house with his rifle. Presley had a relationship with her dad, but it was a relationship of fear and confusion. He was never physically violent toward her or her mother, but she says that there were time when she thought it could escalate to that.

Presley began her writing project tentatively. The phone call on day one of the project couldn't have lasted for more than a minute, consisting of her father telling her that he didn't want to talk about the war, and her quickly hanging up the phone. But she was persistent, sticking with her stated goal. With each passing day, her father opened up more about his experiences in the war. It wasn't long before Presley and her father were discussing things that happened in their home during her childhood, at once apologizing, consoling and analyzing. By the end of the thirty days, Presley's relationship with her father has changed drastically. She looks forward to talking and seeing him, and he with her. And perhaps most importantly, being able to move on from some of darker spots in her past has enabled the brighter spots to shine through. As she put it, "It's interesting how the good memories come back when you stop being angry."

Thirty Days is structured like you would expecting a writing project like this to be structured. It is comprised of 60 sections: an entry for each day and a journal entry that accompanies each daily entry. I found it interesting to see how both Presley and her father changed in how they dealt with each other. Her conservative Christian upbringing resonated with me, having grown up the same way. I think this made me connect with her in a way that I wasn't expecting.

I don't think this book is for everyone. It follows a fairly predictable trajectory, with few twists or turns, and the writing is fairly spartan. However, if you are interested in learning more about PTSD and its affect on families, this book will be a valuable resource.
Posted by Carlton Farmer at 1:36 PM

I can't imagine having a father with PTSD ... what a horrific experience for a child.

Thanks for sharing your thoughts on this book for the tour.

The author does an excellent job of drawing you into her story to the effect that you can feel her tension ebb and flow in your own body as you read through each conversation and journal entry.