The Lost World by Michael Crichton 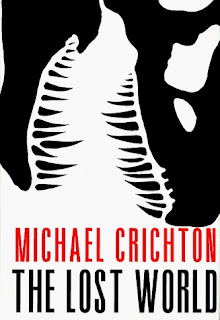 Michael Crichton does a good job following up his bestseller Jurassic Park. The books were quite similar in their overall tone and style, although I did find Lost World to be quite a bit more graphically gruesome than its predecessor.

Crichton works hard to squeeze two precocious tweens, Arby and Kelly, into the book, although there inclusion strains credulity far more than Lex and Tim did in Jurassic Park. However, the addition of Arby and Kelly was as much fun as it was improbable.

The only character from Jurassic Park that plays any significant role in Lost World is the rogue mathematician Ian Malcolm. This character is involved in most of the action in the book. We are treated to another one of Malcolm's morphine induced rants, updated with new thoughts on evolution, extinction, and mathematical theories. Complexity Theory has replaced Chaos Theory as the crux to Dr. Malcolm's intellectual meanderings.

While Crichton relies heavily on the themes he did in Jurassic Park, he adds new layers to the story of InGen's effort to bring dinosaurs back to life. If you enjoy the movies you will enjoy these books.
Posted by Carlton Farmer at 4:17 PM