Through the Looking Glass by Lewis Carroll 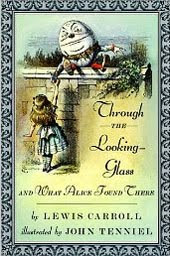 'Crawling at your feet,' said the Gnat (Alice drew her feet back in some alarm), 'you may observe a Bread-and-Butterfly. Its wings are thin slices of Bread-and-butter, its body is a crust, and its head is a lump of sugar.'
'And what does IT live on?'
'Weak tea with cream in it.'
A new difficulty came into Alice's head. 'Supposing it couldn't find any?' she suggested.
'Then it would die, of course.'
'But that must happen very often,' Alice remarked thoughtfully.
'It always happens,' said the Gnat.

In 2009, I read Alice in Wonderland. It was in a double book with Through the Looking Glass, which I intended to read but never got around to. I did notice upon reading Alice that some of the most famous episodes from the Alice stories weren't in Alice in Wonderland, primarily the Jabberwocky and Tweedledee and Tweedledum.

That's remedied in Through the Looking Glass, which is just as absurd but somehow more difficult than its predecessor. When Alice in Wonderland is preoccupied with playing cards and the contrast of size, Through the Looking Glass is structured around an elaborate chess problem, one I could barely even identify, let alone solve, and issues of time and place. Throughout the story, Alice tries to move from place to the next, usually ending up somewhere--or some time--completely different than she intended. Here she is, trying vainly to get an expanation from the Queen:

[T]he Queen cried 'Faster! Faster!' and dragged her along. 'Are we nearly there?' Alice managed to pant out at last.
'Nearly there!' the Queen repeated. 'Why, we passed it ten minutes ago! Faster!'

Every step Alice takes seems to land her in a new, bizarre situation, until the little girl who bravely endured giant caterpillars, the cheshire cat, and the mad hatter in Alice in Wonderland is nearly overcome. I've heard that Through the Looking Glass is a darker work than Alice, and although the storyline doesn't seem darker to me (and has no single scene as disturbing as the pig-baby), it is more disorienting. Differences of size are comprehensible, but differences of time, of spatial distance, of movement, these are more direct, more personal, and more overwhelming.

Alice, of course, eventually figures out what to do, and returns to her own time and place, but not without some lingering doubts about the nature of reality. No doubt her thoughts echo some of Carroll's own: the twisted logic of Wonderland looks on the surface like that of a child, but upon closer inspection reveals depth that only comes with time and experience. Through the Looking Glass closes with this haunting tercet:

Ever drifting down the stream—
Lingering in the golden gleam—
Life, what is it but a dream?

In Carroll's work, life seems as nonsensical and unreal as Wonderland. Who's to say what is, and what is not? These books don't provide any answers, but they do raise some interesting questions.
Posted by Brent Waggoner at 3:38 PM

Email ThisBlogThis!Share to TwitterShare to FacebookShare to Pinterest
Labels: alice in wonderland, fantasy, lewis carroll, through the looking glass

I think I slightly preferred Alice in Wonderland for the (slightly) clearer narrative line, but they really do feel like two sides of the same coin.