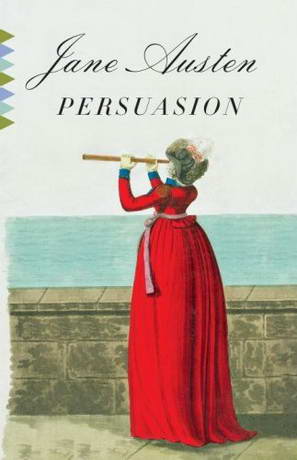 His choice of subjects, his expressions, and still more his manner and look, had been such as she could see in only one light. His opinion of Louisa Musgrove's inferiority, an opinion which he had seemed solicitous to give, his wonder at Captain Benwick, his feelings as to a first, strong attachment,--sentences begun which he could not finish--his half averted eyes, and more than half expressive glance--all, all declared that he had a heart returning to her at least; that anger, resentment, avoidance, were no more; and that they were succeeded, not merely by friendship and regard, but by the tenderness of the past; yes, some share of the tenderness of the past. She could not contemplate the change as implying less.--He must love her.

Anne Elliott hardly belongs in the same company as Austen's more infamous heroines, Emma Woodhouse and Elizabeth Bennet. She has nothing of either's more appealing flaws--Emma's gregarious meddlesomeness, and Elizabeth's prideful wit--and indeed Austen is famous for having remarked that Anne herself was "too good for her." Like the other two, she is fiercely intelligent; though while Emma's intelligence is social and Elizabeth's bookish, only Anne's can be called practical. Her most singular trait, however, is her perceptiveness: Anne alone sees and knows those around her, though she is rarely seen and hardly known except by the object of her love, Captain Wentworth.

He, too, is perceptive, but more narrowly in that his perception extends chiefly to Anne. Once, eight years before the book begins, that shared perception nearly led to marriage, before Anne allowed herself to be persuaded against it by her godmother, Lady Russell. When Wentworth appears again, compelled to renew his association with the Elliots by (as is always the case in Austen) a matter of property, he spends most of his time trying to avoid Anne in spite of his feelings. Here is a book in which the two principals barely speak to one another, and yet Anne and Wentworth operate on a separate wavelength, by which their thoughts are available to each other, whether they wish them to be or not.

Wentworth's detachment makes him something of a cipher. Is there anything else to recommend him to us? He is a decorated serviceman, with impeccable manners but an undistinguished intelligence and a clumsy romantic impulse. One suspects that only die-hard Austenites would read Wentworth fan-fiction. But we believe in him because we trust Anne, and while she is being roundly ignored by her father, sisters, cousins, et cetera, Wentworth is attuned to her, which must count for something.

The perceptiveness that Anne and Wentworth possess enables their survival in Persuasion's universe, which is marked by some of Austen's most savage satire:

The real circumstances of this pathetic piece of family history were, that the Musgroves had the ill fortune of a very troublesome, hopeless son; and the good fortune to lose him before he reached his twentieth year; that he had been sent to sea, because he was very stupid and unmanageable on shore; that he had been very little ared for at any time by his family, though quite as much as he deserved; seldom heard of, and scarcely at all regretted, when the intelligence of his death abroad had worked its way to Uppercross, two years before.

One of most interesting questions about Austen's work is to what it extent it opposes the social framework of her era; attempts to categorize Pride and Prejudice as a feminist novel, for example, inevitably overshoot the mark. Persuasion seems to me to be Austen at her most radical, and the above paragraph presents a view of an England that has no conception of true value. Anne's blessing is that she understands the worth of others; Wentworth's is that he understands the worth of Anne.

And yet, as with her other novels, Austen's social commentary cedes precedence to the expression of character. In The Western Canon, Harold Bloom has an essay called "Canonical Memory in Early Wordsworth and Austen's Persuasion." It's one of Bloom's shaggiest pieces, and I don't think I can really describe what Bloom means by "canonical memory," but I will agree that memory is the novel's most vital force.

There are, by my count, three widowers in Persuasion and one widow. Lady Russell is one, and so is Anne's hopelessly vain father, Sir Elliot. Anne is linked romantically to the other two: William Elliot, a cousin and the inheritor of the Elliot estate (think Mr. Collins in Pride and Prejudice), whose marriage was unhappy, and Captain Benwick, who, while not technically a widower, recently endured the death of his sweetheart. At first blush either would seem a match for Anne--Elliot is insanely wealthy and charming, Benwick bookish and intelligent.

And yet by the book's end we come to understand exactly why Anne needs Wentworth. Her perceptiveness, combined with her innate kindness, has led to a lifelong campaign of self-denial in which she quite admirably suffers the pettinesses of her family and friends without complaint. Wentworth represents Anne's past and as such does what no one else can: He connects Anne to herself. She, in turn, does the same for him. Neither Elliot nor Benwick can do this for Anne, nor she for them; having buried their first loves their pasts are wasteland, ruinous, irrevocable.

Persuasion, quite simply, is a novel of second chances, of memories reclaimed as living truths. Elizabeth and Emma require a great deal of self-discovery before they can find love; Anne is fully fledged and only needs to rediscover Wentworth, whom she has lost, and who, quite happily, has found her again.

P.S.: I didn't read the version pictured, but I wish I had, because that is an illustrator that really understands the book they're illustrating. Love the symbolism of Anne's telescope.
Posted by Christopher at 6:08 PM

For those keeping score at home: Emma > P&P > Persuasion.

Also, here's a really good article about how shitty of a writer Austen was, sorta: