A Room with a View by E. M. Forster 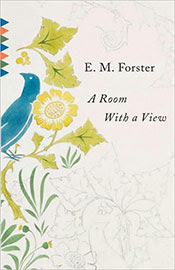 Have you ever noticed that there are people who do things which are most indelicate, and yet at the same time - beautiful?

A Room with a View was a strange book. Although its settings are diverse, starting out in Italy and making stops in a couple other countries, much of the story feels like a chamber drama. Indeed, it’s not hard to imagine the whole novel playing out on a stage, which would easily hold all the novel’s principles at the curtain call. The conflict is mostly internal, with most of the external action holding significance only because of what we, the readers, know to be happening internally. The big events in the novel—a murder, an unkept secret—are background to the real drama, that of Lucy’s transformation from proper Victorian woman into a more modern type.

The story is simple: young Lucy Honeychurch is staying in Italy with several other people, including her cousin, Charlotte Bartlett, strange outsiders Mr. Emerson and his son, George, wannabe novelist Eleanor Lavish, etc. One day, while downtown by herself, Lucy witnesses a murder, passes out, and comes to in George’s arms. This leads, eventually, to a stolen kiss, and then the action moves to England, where Lucy attempts to forget about George through an engagement to a boorish lout, Cecil.

At risk of simply repeating Chris’s review, I think Cecil may be Room’s greatest creation: at first a simple, boorish snob, he becomes suddenly human when Lucy breaks off her engagement in favor of George. It’s as if he goes from a two-dimensional line drawing to a fully realized three-dimensional character, suddenly commandeering our sympathy once he reveals his weaknesses. He leaves the novel, never to return, immediately after his redemption, a perfect gentleman, not a villain at all.

The ending of the book is romantic without being sappy, probably due to its brevity—Forster spends only as much time as necessary to establish George and Lucy’s bond, not letting their romance, which is, pardon the redundancy, romantic, become sappy or unbelievable.

I don’t know what else to say about A Room with a View. It seems like a fairly simple book, , not necessarily thematically—there’s a lot here about religion and art, to begin with, that I haven’t touched on—but there is something skeletal and bare about the novel, not In a bad way, but in a way that’s extremely compact. Like this review.
Posted by Brent Waggoner at 7:42 PM

Email ThisBlogThis!Share to TwitterShare to FacebookShare to Pinterest
Labels: A Room with a View, EM Forster, Victorian