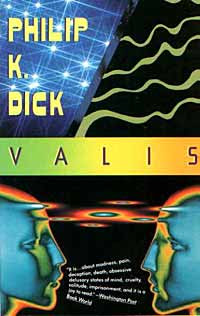 As I wake up I think, I should drive north to the lake; as beautiful as it is down here, with my wife and the back garden and the wild roses, the lake is nicer. But then I realize that this is January and there will be snow on the highway when I get north of the Bay Area; this is not a good time to drive back to the cabin on the lake. I should wait until summer; I am really, after all, a rather timid driver. My car's a good one, though; a nearly new red Capri. And then as I wake up more I realize that I am living in an apartment in southern California alone. I have no wife. There is no such house, with the back garden and the high retaining wall with wild rose bushes. Stranger still, not only do I not have a cabin on the lake up north but no such lake in California exists. The map I hold mentally during my dream is a counterfeit map; it does not depict California…

Who is this wife? Not only am I single; I have never been married to nor seen this woman. Yet in the dreams I felt deep, comfortable and familiar love toward her, the kind of love which grows only with the passage of many years. But how do I even know that, since I have never had anyone to feel such love for?
- VALIS

Aside from something completely narrative-free, like poetry, books like VALIS are the most difficult to review. In some ways, they’re even harder. After all, if I were to describe VALIS in terms of plot, it would probably sound like a fun little sci-fi potboiler: Set in 1970, the story is told through the eyes of one Horselover Fat, whose friends are slowly dying. After one of his closest friends, Gracie, commits suicide, Fat is hit by a mysterious pink laser which provides what everyone wants in light of an inexplicable tragedy: answers. Armed with information, some vague and some specific, Fat attempts to unravel the mysteries of the universe: why is there evil? Who is God, and what is he doing? Is the universe rational? In his search, he comes across all manner of characters, from skeptics and crooks, to prophetic rock stars, eventually uncovering a conspiracy that goes all the way to the top of the metaphysical ladder.

That’s a technically accurate description of the plot, but it isn’t really a good description of the novel itself. For one thing, Fat is Philip K. Dick, first implicitly and later explicitly, even though he carries on two-sided conversations with Philip, even taking a trip by himself at one point, which probably qualifies him as a most unreliable narrator. Also, all the plot points mentioned above take up maybe a third of the book’s length. The rest is filled with philosophical observations and strange, pseudo scriptural interludes—in fact, the book contains an appendix of Fat’s “inspired musings”, complete with easy-to-reference verses. Long story short: VALIS can be amazingly pretentious.

With that in mind, it’s even more surprising that there are portions of VALIS that are extremely affecting. Fat’s musings about his dead friend and what her death might mean are touching, and when Fat finds the answer he’s looking for—the meaning of it all—it brilliantly undercuts a lot of the pretension. That is, until another late novel twist that could be interpreted as either extremely joyous or sad. Knowing Dick, it’s probably the latter, but it’s hard to tell.

Besides Dick’s self-identification with Fat, it’s hard to overlook the fact that VALIS is based on a real divine experience he claimed to have had. This basis in fact, particularly that Fat’s Exegesis, VALIS’s version of a Bible, is a fictionalized version of a document Dick actually kept—his attempt to unravel the mysteries of the universe. It feels at times like Dick is writing a religious text—indeed, Fat describes his Exegesis as a new cosmogony—so it’s hard to know how seriously to take things.

At times, VALIS is a slog, but it’s redeemed by some well-drawn characters, particularly Fat’s skeptic friend, Kevin, and some of Dick’s uniquely pitch-black humor. There are also a lot of interesting ideas buried in Dick’s synthesis of Christianity, Gnosticism, Buddhism, and about every other religious system you can imagine, but as a religious work, it ultimately feels a bit empty. On the other hand, read as Dick’s attempt to understand and overcome a serious loss, it’s revealing and poignant. Dick was a disturbed man, and his self-awareness is both VALIS’s strength and its Achilles heel. Reading VALIS is like watching a man slowly lose his mind—does that sound like something you ‘d like?

Posted by Brent Waggoner at 7:10 PM