The Bride of Stone by Thomas Williams 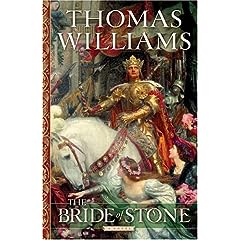 The Bride of Stone is the third book in the Seven Kingdoms Chronicles. However, it is a prequel to the first two. They are fantasy books about seven kingdoms on an island, and their struggles to serve the Master of the Universe. The book(s) is interesting and keeps you turning the pages. It has an interesting way of presenting truth. It isn't fabulous, but it is fun.

All of the books deal with the Crown of Eden, a crown that has jewels from the Garden of Eden. The crown exaggerates the deepest desire of whoever wears it, even giving them physical characteristics that resemble heir desire.

Morgultha is the "bad guy", she is probably a million years old, and in one of the books she mates with the Devil so she can have an evil child to help her take over the seven kingdoms. This woman is desperate. In this latest book, Morgultha attacks the seven kingdoms with an army she has created by reanimating the bodies of dead people and animals. She is defeated by the general, Percival, who unties the seven kingdoms into one army. After the battle, Percival is named high king of all seven kingdoms.

He rules justly for a few years, until he is tempted by some bad guys to wear the crown. The crown causes him to be overcome with pride. He fills all of his halls with filthy art that doesn't display the true beauty of the Master of the Universe, cheats on his wife, promises his daughter to a king she doesn't want to marry, and alienates his son by forcing him to be a warrior when he doesn't have the physical ability to do so.

All of this leads to his wife's death, his daughter falling in love with some other guy, who Percival kills after scaring his daughter's face for life with hot oil, and his son hating him and the rest of the family and being a general trouble maker. Soon, the proud king decides that he really needs the 500ft mountain that can be seen from all seven kingdoms carved into a statue of his naked self.

Now, there is a sculptor who is better than any other sculptor that ever has been or will be, and he is only seven. So, his dad sends him to get some special lessons from a sculptor who only makes art that glorifies the Master of the Universe, and the boy learns to make this kind of art as well. When, I think his name is Damien?, gets older, he falls for this barmaid and makes a sculpture of her. When she steals all of his money and breaks his heart he swears to hate all women forever and won't sculpt and females.

Of course, Damien and his mentor are soon commissioned to make two figures, Adam and Eve. Damien refuses to work on Eve, but makes an exceptional Adam. However, after Adam falls on his mentor and kills him, Damien is forced make Eve after all. He makes the most beautiful woman that ever has been or will be, and falls in love with her.

So, the night he finishes both statues, the kirk (like a priest) comes to destroy them and kill Damien for making them because he is one of the guys who hates art and beauty. One of the monks hears of this and warns Damien. They both escape with the two statues. They sell Adam and after being commissioned by the king to carve the mountain nude of the king, they pack up and take Eve with them.

As Damien works for the king, he passes this wall every day and hears this girl singing the saddest songs in the world. So, he starts to talk to her and makes friends. The girl is the princess, hidden away by her father so that no one will see her awful scar.

Now, Morgultha is still at work. She convinces some ancient spirits to sell her the incantation for animating sculptures. They let her animate one, and whatever sculptures that one touches, they are animated too, but if the first one is destroyed it destroys all of them. So, she animates Eve, who becomes a live person that Damien loves, and she has Eve animate a little model of Percival that Damien had made as a model for the mountain statue. Then, she has the Percival statue make 1000 more just like itself, and leaves Eve with Damien, just as the ancient evil spirits told her to do.

The things about Eve though, is that she mirrors all of Damien's thoughts and desires, so she has no personality of her own at all. Anyway, there is a war. Percival goes to meet the army of statues that look just like him and is killed. One of the statues comes to kill the rest of the royal family. The prince escapes, but the princess is trapped and Damien has to come and save her. The statue starts to choke her, so Damien runs home and destroys Eve, destroying all the other statues as well. When he strikes Eve, he goes blind, but somehow makes it back to the castle.

Then they escape. In the night an angel comes to the princess and asks her lets her chose to have her own beauty back or Damien's eyesight. She gets Damien's sight back and he thinks she is gorgeous even with her scar. So they live happily ever after as peasants, and the wicked prince rules in his father's place until he is overthrown and the seven kingdoms are once again split into the seven.
Posted by Liz Waggoner at 9:04 AM